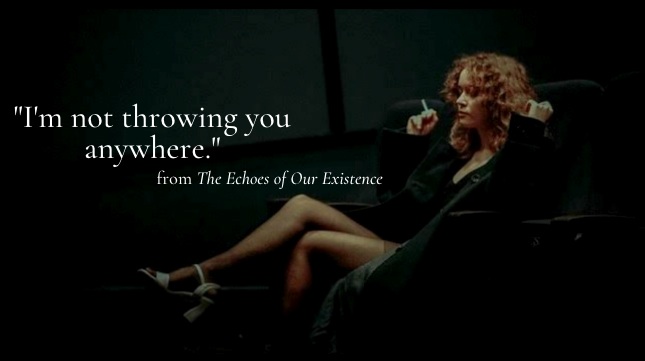 Seanna challenges Hopper due to his inhibitions in this drama scene from the one-act eplay, The Echoes of Our Existence.

HOPPER: If this is what you want.

SEANNA: You could go now.

HOPPER: You’re throwing me out.

SEANNA: I’m not throwing you anywhere.

HOPPER: But you want me to leave.

SEANNA: I’ve been called much worse.

HOPPER: I’m not trying to call you names.

SEANNA: Is your manhood wounded?

SEANNA: What is your manhood anyway? Describe it to me.

HOPPER: I wouldn’t know where to start.

SEANNA: Give me one example of your beloved manhood.

HOPPER: I don’t believe I’m in love with my own manhood. I’m just an average guy.

HOPPER: You saying I’m not average?

SEANNA: I’m saying you are traditional.

SEANNA: There are values one should hold and others necessary to discard. The trouble is we tend to hold on to the wrong values for far too long.

HOPPER: And just how does one know which is which? 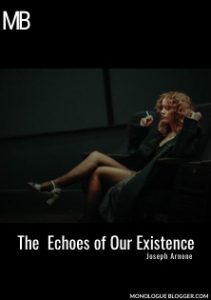 In the one act eplay, The Echoes of Our Existence, Seanna pushes Hopper to come to terms with the nature of their relationship and himself.  1 Woman, 1 Man.  Drama.