In Last Day of June, June talks to her neighbor Ernest about the strange occurrence that happened during her attempt at ending her life.

JUNE: I was going to kill myself. I was going to lay in my bathroom tub and toss my blow dryer in it. But something odd happened, something unexplainable. I was laying down in my tub and reached for my blow dryer but when my fingertips touched it, a voice called out to me, “June”. It sounded like someone entered my home and called my name gently. I asked if anyone was there and again I heard my name softly called…”June”. This time I stood up and out of the tub, put on my robe and made my way into the living-room. No one was there. (beat) I decided to make myself an outdoor fire. Don’t ask me why, but I suddenly had this urge to get dry by the fire, and so I did. I’ve been sitting here ever since. But today was the last day of June and I decided to take my life…maybe I did, I feel as though I am gone, although I am talking with you now. 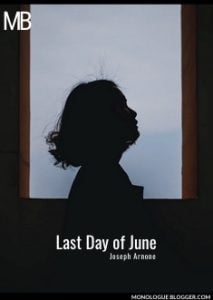 In this one-act eplay, Ernest visits his neighbor June after he witnesses strange flashes of light coming from within her home.  He sees her out in her backyard and makes a frightening discovery.  1 Woman, 1 Man.  Drama. Thriller.