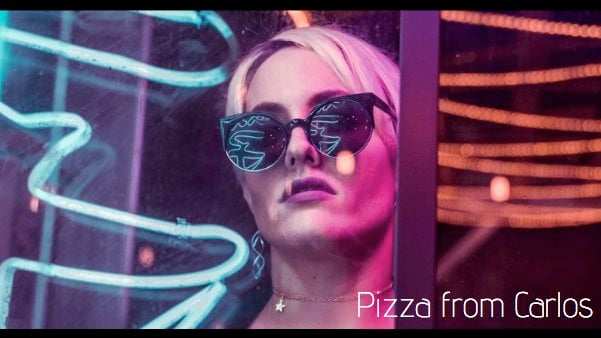 This is a serio-comedic monologue from the one-act play Pizza from Carlos.  Corky plops herself on Moe/Saul’s couch and talks about her problems.

The odd thing about it all is that Moe and Saul have never seen this woman in their entire lives.

CORKY: What’s the matter with you two a**holes? You know I hate the heat. Brought you morons some pizza from Carlos. Eat, eat, eat.

[Saul and Moe look at one another. Moe goes to the pizza box and takes out a slice. Saul eventually does the same.]

I don’t have patience. If there is one thing I wish I could change about myself, it’s patience. I’ve gotten better at it, over the years, I’ve improved. I’ve learned how to let the steam out, before I blow…but I can do better, I should do better, I HAVE TO DO BETTER!!!

Buttons get pushed, my heart starts beating, grinding my teeth or humming, I hum, I hum frustrated tunes to myself in order to release all this pent up steam…I’ll breathe, take deep breaths but ultimately, I’m a failure…I lose my battle against myself and I’m a woman who has strong will power, believe me…it’s the one thing though, that one freaking thing I constantly fight against…myself.

There’s guilt, anger, violence. Can’t tell you how many times I’ve punched something, whether it’s a bookcase or a door, a wall, a person. Yeah. (holds up her index finger) My index finger always blows up, gets swollen. All from a previous injury I got way back when. Another bitch, another story.

The aftermath is always the same; I feel like a piece of sh’t, a real low life, cause I failed. I failed to keep it together.

There’s that image I have that burns in my brain. It will be with me forever. The look I was given…her eyes…there is nothing worse than that look she gave me…nothing worse…

[Corky downs the rest of her beer.]

Grab me another Paris Blu.

[Saul gets up and grabs the beer, handing it to Corky who downs half the bottle.]

To think, I love this woman, actually love her more than anything in this world…why is it so hard to control our emotions? (beat) I’m asking you guys…why? 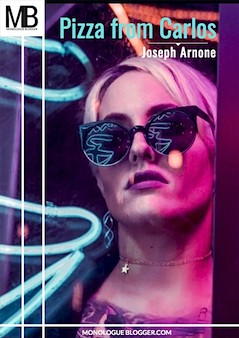 In this one-act ePlay, Moe and Saul, two roommates who can’t make their rent, encounter a woman they’ve never met before named Corky, who brings them pizza and talks about her problems.  Serio-comedy piece.  3 characters.