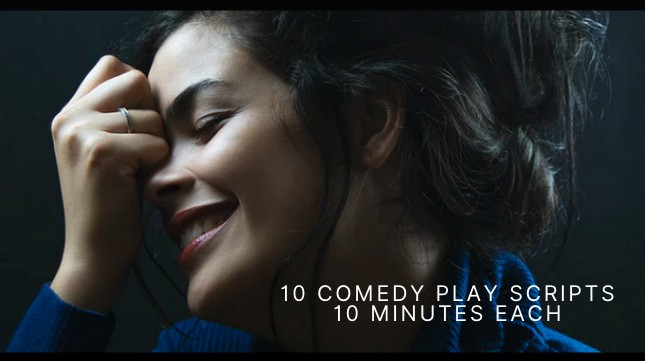 In 10 Comedy Play Scripts 10 Minutes Each provides creatives with a short and funny list of 1 location plays with minimal characters.

We also encourage you to gender swap the parts if that interests you. All the written roles can be interchangeable and tweaked to suit your creative needs.

SEARCHING FOR BUBBLE BUTT (1 Woman, 1 Man)
Matt is upset over the fact that the butt he thought he had is nonexistent and his girlfriend tries to give him a reality check in order to see him through.

FUNGUS AMONG US (2 Women)
After Alexa complains to her roommate about their messy apartment, something stirs in their refrigerator that causes great concern.

GRACE PERIOD (2 Men)
Burt is panicking over how he is going to pay his bills while his “take it easy” roommate Ralphy tries to cool him down.

THE LAST M&M SAMURAI (2 Men)
Dan goes deep on his philosophy about why he never eats the final m&m in his bag of peanuts.

RATHER BE A MAN  (2 Women, 1 Man)
Kim is fed up with how guys approach her whenever she’s out and about in public and she shares her frustration with her best friend.

THERE HE IS (3 Men)
Pete loves his new job but a certain co-worker has been invading his space trying to bring the concept of best friends forever to his world.

MELTING AWAY (1 Woman, 1 Man)
While sunbathing on the beach with his girlfriend, Brian begins to feel as though he is melting under the sun.

MEDIUM (1 Woman, 1 Man)
A not so tall man debates with his girlfriend over his height and while larger clothes don’t fit him.

OVER THE MOON (1 Woman, 1 Man)
A first date between two people who are literally worlds apart.

UNDERWHELM (1 Woman, 1 Man)
After sharing her bored reality with her co-worker, Wilma gets brought to Chinatown in NYC to break the monotony and discover something new.