In Burden of Being Taken, SON talks to his mother and father about his experience during the war.

BAKER/SON: I wanted to tell you both myself. I was blown apart into thousands of pieces just two days ago. Blood and guts sprayed everywhere. Some of the guys and I were getting really drunk off base and when we made it back we started tossing around grenades and daring eachother to do crazy shit. So, me being the craziest of all, took out the pin, jammed the grenade down the front of my pants and blew my balls clear off!

You HAD to see the other guys faces, similar to yours right now actually and it was wild. Totally stunned, everybody was totally, totally stunned. Anyhoo, just wanted you both to hear it from your most perfect freaking son. Because I’m absolutely perfect. The best Goddamn son ever invented by your mixed combination of DNA.

I used to follow the wind whichever way it blew me, like a leaf spinning around, tossing and tumbling and begging to be stopped. Just like you guys. Awww shucks. Aren’t we all a bunch of chuckles? Just like you’ve been dad. Right?? Right Mom? The most happy stiff to ever out Americanize America. Follow the wind until it blows us all up! Roast that turkey, Mom. Be a skinflint Pop. Love you guys! 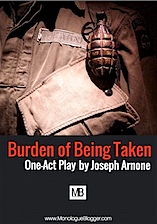 BAKER comes home from the war and the repercussions of it reveal its impact on one small family in this one-act play.