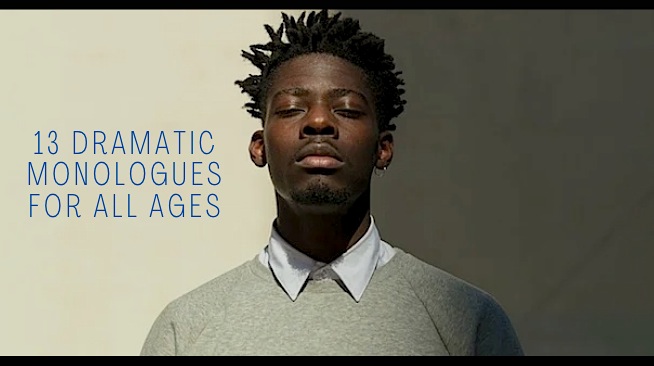 13 Dramatic Monologues for All Ages offers topics that include school pressure, affection, haunted past, responsibility, romance, hope and laziness.

13 Dramatic Monologues for All Ages

LAND OF THE FORGOTTEN
George spends another day at the park relaxing and enjoying the sun.  When he meets a young woman named Kim that reminds him of his daughter.

HULLABALOO
Dun does his best to convince Maggie that it’s time she sends her son to the academy.

I CAN’T WIN
Nella doesn’t understand why her daughter picks guys to date that aren’t up to her standards.

TREAT ME NICE
Corinne and her mother never get along but when they discuss Corinne’s father, solace may be reached.

CHECKING IN
Rob was abandoned when he was just a little boy.  Many years have passed and he is now a young man searching for his father with troubling news.

VOICES IN THE TREES
Marina sees things that the doctors say are not normal, but maybe she has  a secret power no one can comprehend.

SHRINKING VIOLET
Dabney and Harlotte are conflicted over the well being of their son’s future after he states that he wants to go his own way.

CONTENTS FLAMMABLE
A group meeting where mother’s discuss the sad events that took place in their children’s lives.

ALL THAT MATTERS MOST
Clyde is going out of business and scrambles to figure out a plan to keep taking care of his family.

BURDEN OF BEING TAKEN
Baker is a war vet come home raising hell.

SACK OF FEATHERS
A mother was forced to take over a business when her husband died and now has to try and show her daughter the way forward if she were to take the reins from her.

OLD HABITS DIE SLOWLY
Wilford sits down to eat breakfast with his daughter only to spring the news that his wife wishes to leave him for a younger man.

MR. BAD MOOD
A father is afraid to leave work because he knows at some point during the next few weeks he will die.