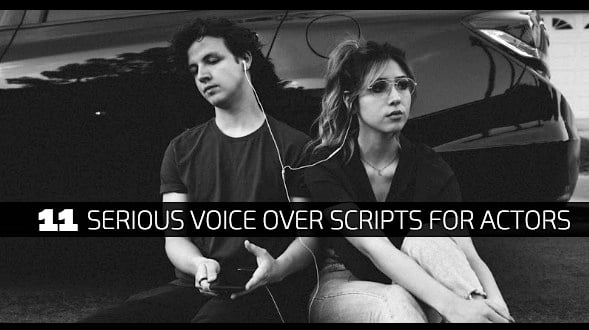 11 Serious Voice Over Scripts is a good place to find free scripts if you wish to practice voice-over acting.

11 Serious Voice Over Scripts for Actors

DAMNED IF I DO
Rina tries to keep her man from leaving the house to go help his constantly troubled brother.  Danger is on the horizon and this could end deadly.

PLACE YOUR BET
Two high powered women face off with a major decision that can either make or break the company.

LET’S TAKE A WALK
This is a crime scripts with two guys.  Vito question Mario about a night club situation that resulted in violence.

GENUINE ARTICLE
Darlene has had the carpet ripped out from under her when her business partner took her half of the business away from her.

CHUTZPAH
Sandra is a troubled teen who strikes up a conversation with the local homeless lady.

LOWER YOUR VOICE
Pella notices her friend James’ behavior has changed and she makes an attempt at talking to him about his steroid usage.

DISTANCE BETWEEN US
A father and daughter who have never gotten along…the father is dying…is it too late to reconcile?

EL CAMINO DEL DIABLO
This short script has a few characters in in but can be alot of fun for voice over script work.

WEIGHT OF LAUGHTER
This script can also fall into dark humor but we couldn’t resist sharing it with you because both character in this piece are actually conducting a radio interview.

HIGHFLYING
Two sisters talk serious business inside a funeral parlor…this script does have a touch of the humor to it but this can be a really good voice over script for two women.