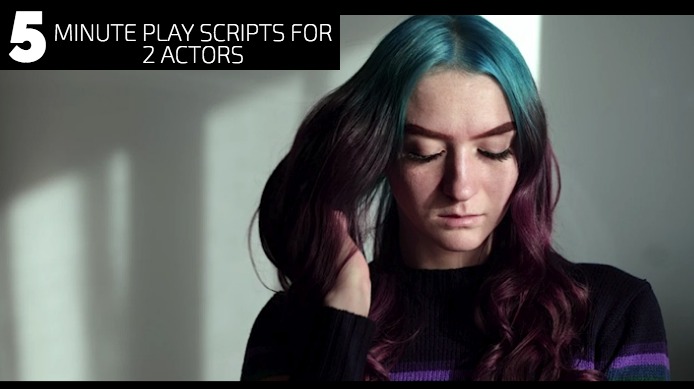 Comedic and dramatic 5 minute play scripts for 2 actors only.  Some scripts are 1 woman, 1 man, 2 men, or 2 women.  You may also find short scripts that run 3-4 minutes long.

THE MONSTER
Ramsey tried to force himself on his best friend and roommate Byra while drunk.

BEFORE THE LIGHT WENT OUT
Samuel’s mother has just died and he wasn’t able to be present in the room.  Instead, he waited outside the hospital in the snow.

KILLING YOU
A serial killer has caught their latest victim but the tables may turn on the outcome of this event.

PROTECTIVE SHIELD
Rita is introverted but wants to be more social.

MR. BAD MOOD
Vince is dying and tells his son for the first time.

THE LAST M&M SAMURAI
Dan talks to his close friend about why he shouldn’t eat the last m&m in the bag.

FUNGUS AMONG US
Alexa is fed up with her roommate being a slob and never cleaning out the old food in the refrigerator.

MEDIUM
Derek imagines and believes he is 6’5 when in reality he is more like 5’8 and refuses to fess up to his girlfriend due to his pride.

SHADOWS OF MY MIND
Naomi suffers from depression and turns to her trusted Aunt for help.

SEE ME
Alina has gotten rejected again from another drama school audition…she talks to her cat Rosie about it.

DARK SIDE OF MY MOON
Jobe is a competitor’s nightmare but he may be overdoing it and affecting his mental health.

MIND TRICK
This 5 minute play explores our relationship with the word normal.

I CAN’T WIN
Nella can’t stand her daughter’s boyfriend and she talks to her husband about how she feels.

TYPICAL TEEN
Shadira is a gifted figure skater but her family doesn’t see her potential.

MIDSUMMER NIGHT
Chanade is contemplating suicide but her friend may turn things around.