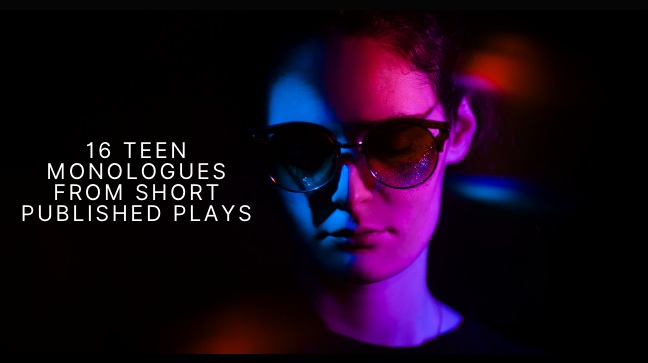 16 Teen Monologues from Short Published Plays provides young actors with monologues and scenes all rolled into a one-act play.

The stage plays shared here are excellent for minimal cast and monologue practice.

SEE ME AS A STRANGER
Teenagers Gordy and Tammy have a baby of their own and struggle to find stability both financially and in their relationship in order to survive.

INVISIBLE ROADS
Jud can no longer abide by her family and small town rules and she plans to get money by any means necessary and flee.

HIGH PLACES
Harrison locates the girl he met on campus to discover that they come from very different backgrounds but despite their differences, Harrison can’t stop himself from caring about Tiffany.

GONE TOO SOON
Tarva has it rough.  She’s recently lost her mother and is caring for her father while raising two kids of her own.

CHECKING IN
After much searching and stress Rob locates his biological father to tell him what he really feels about him.

THOSE DAYS ARE OVER
Marsha is having yet another argument with her sister but this time there may be some common ground reached between them.

MORE WAYS THAN ONE
Porterfield has become the go to guy at school for trouble but while in the principal’s office for another issue a different side to Porterfield gets revealed.

THE PIT OF MY STOMACH
Nina demands that her father stop his criminal hustles and instead shapes up to be the father she always hoped he could be.

WASTE OF TIME
Byron is a young and successful entrepreneur who blames school for getting in the way of his full potential.

TYPICAL TEEN
Shadira is a ice skating prodigy who receives no understanding from her family for the vital support she needs to succeed with her passion.

DARK SIDE OF MY MOON
Jobe has the potential to be a pro athlete one day but confesses to his brother that he thinks his competitive intensity might not be all that healthy.

THE BEAR
Tiffany has a ton of compassion for everyone else but herself and her self neglect is taking its toll on her.

THIN ICE
Kyle opens up to Scarlet about how he finds it strange the way people view him as the new kid in school.

TRUE CALLING
Charla gives her best antidote to her friend Melanie to follow her dreams and believe in herself.

DUST IN OUR EYES
Dean shares the difficulties from his own life in order to shed light on his best friend’s situation.

ONE-WAY CONVERSATION
All Bella hopes for is that her mother finds the time to be her friend rather than always running around for everyone else and being busy all of the time.