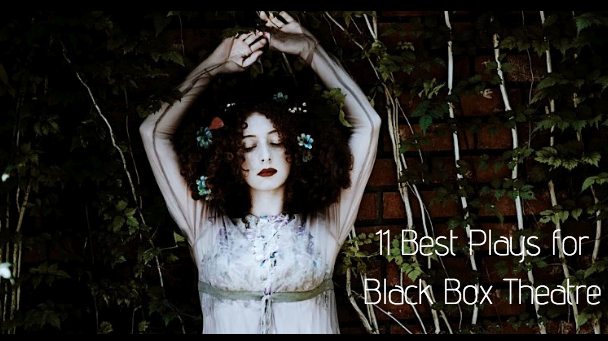 Here’s 11 Best Plays for Black Box Theatre if you are working with a small budget in a small theatre venue looking to put on a show.

WHATEVER HAPPENED TO LUELLA BEANS?
This is a one-act play that combines criminal and family life and seeks out the truth of relationships by combining the past and the present.

EYES OF MY DAUGHTER
Mugsy meets his friend Douglas at their local bar as a distraction to get away from his family problems but it’s not enough to pull him away.

BURDEN OF BEING TAKEN
A wildly satiric yet dramatically felt one-act play about the nature of war and the after effects on family.

MAPLE ROAD
Marshall and his father Jim try to connect over the unspoken reality that Marshall like men instead of women.

DAMAGED GOODS
It’s fashion week and Edmund is an old school journalist who has lived life a drug fueled life.  In this one-act play he meets Avy, a newbie on the fashion scene who is a design assistant.

DARK PLACE
Jeffrey is an actor gone mad.  He now resides in a psycho ward and receives a visitation from a fellow actor friend.

WASTED TALENT
Donnie revisits his past over his band and the friend who committed suicide.

ROAST BEEF MEANS EVERYTHING’S GRAVY
Jerzy is informed that the crappy motel business his family owns is being sold.  He isn’t pleased with the news and argues with his father over it.  Through their disagreements, Jerzy learns of the most horrific news about his father.

SACK OF FEATHERS
Jackie and her daughter Henrietta draw new lines in the sand as to the direction of their family owned business and relationship.

TOAST OF BROADWAY
Two lovers struggling toward their fading dreams…one is an actress, the other a writer, both have dark demons they need to overcome.

TREAT ME NICE
Corinne has sacrificed her life taking care of her mother and in this one-act play brings up the issue of her father and their own crumbling connection.