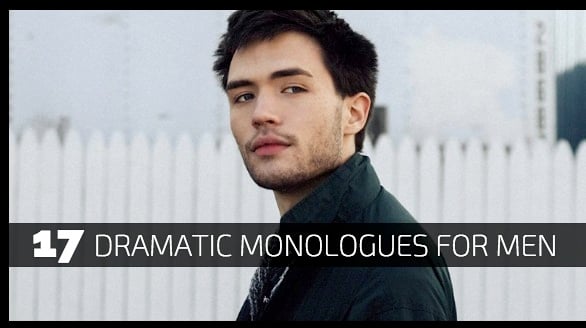 17 Dramatic Monologues for Men who are looking for character’s dealing with dread, doubt, hustle, insanity, evil, confidence and more.

WASTED TALENT
Losing a dear friend is hard and losing them to suicide makes you wonder if you could have somehow saved them.

LAND OF THE FORGOTTEN
George and Kim are two strangers that start a conversation that sheds light on life.

STAY THE NIGHT
Wilkin is a private man and when his mistress starts poking him with questions about his life, his reaction isn’t expected.

THIS SIDE OF THE MISSISSIPPI
Quinn works at his local diner and hopes a miracle will come along to change his life.

SOIL, AIR, SKY
Jeremy talks to his fiancé about how he is planning to move them back to his old neighborhood but his fiancé isn’t really into the idea.

TOAST OF BROADWAY
Charlie wishes he was strong enough to

MORE WAYS THAN ONE
After having a fistfight with a fellow student, Porterfield is sent to the principal’s office.

SHRINKING VIOLET
Dabney and Harlotte argue over whether or not their son should take over the family business.

EYES OF MY DAUGHTER
Mugsy visits his local bar to have a drink and ease his pain over his daughter.

ALL THAT MATTERS MOST
Clyde has reached a challenging time in his life because he is losing his business and doesn’t know how to protect his family.

ROAST BEEF MEANS EVERYTHING’S GRAVY
Jerzy has decided to start his own family with the knowledge that he is expected to take over the family motel business but little does he know his entire life is about to flip.

EVEN THE COLOR BLUE
Johan desires to tell his family that he is a gay man for the first time.

RAY RAY’S STORYBOOK
Marlo is pissed off with his cousin for making a mess and causing a ruckus at his friend’s bar.

CHECKING IN
Rob visits his father in over sixteen years to tell of his mother’s passing.

FOOD ON THE TABLE
Chuck is a good and honest worker who gets accused of a crime he never committed.

A REASONABLE PLAN
Shabe is in too deep with the wrong people and is being forced to commit a crime he doesn’t want to commit.