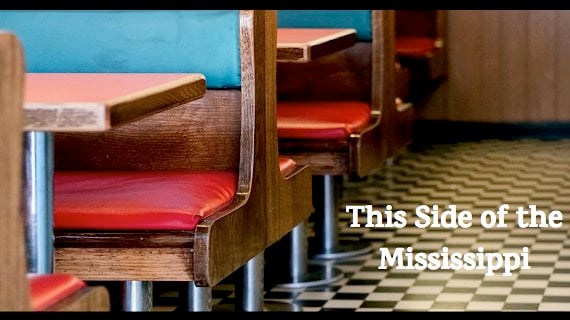 Quinn sweeps the floor and Edie stands behind the counter reading a newspaper and sipping coffee.

This Side of the Mississippi

QUINN: Man oh man, when is the sun ever gonna shine?!

EDIE: Told you to stop puttin’ your mind on that so much and focus on your work around here instead.

QUINN: We ain’t had any sunshine in three whole weeks, Edie!

EDIE: That don’t mean you don’t have a job to do.

QUINN: I ain’t dumb, if that’s what you sayin’.

EDIE: You said it, I ain’t said a damn thing. I’m just sayin’ that we’ve been couped up in here and all you talkin’ about is that the sun don’t shine. No kidding the son don’t shine! How can it shine during a sandstorm? It don’t matter talkin’ about it, it sure as hell ain’t gonna get us outta this storm any faster.

QUINN: Sometimes when a person vents it releases the frustration inside us, so you don’t do something crazy. If ventings all I got, let me vent.

EDIE: It’s one thing to vent and another thing to complain. Your complaining borderlines whining and I don’t like whiners. It’s why I ain’t ever had no kids. Can’t stomach the crying.

QUINN: I’m stir crazy! Can’t travel nowhere. Stuck in this damn diner with you and Pete and I’m hating every minute of it.

EDIE: Clean up around here.

QUINN: There ain’t nothin’ to clean.

QUINN: Them toilets must be the cleanest toilets this side of the Mississippi.

EDIE: What about them greasy ass stoves we got in the kitchen?

QUINN: Go see for yourself. Clean as a whistle. I got every piece a crumb I could find. Inbetween them cracks, all between the steel and metal. All that slime. Which was nasty. Went through two boxes of latex gloves. My fingers are swollen and sore. Worked all that gunk out till my fingers gone soft. I even did the rubber mats multiple times. Out of boredom. Gave them a few run throughs. They look just as new as the first day they were brought in here. Brand new. Whens the last time you saw them rubber mats lookin’ like they belong on a fashion runway stage? Ha! Whatever you call those fashion show things, the CATWALK, that’s it! And Big Moe has disappeared. Ain’t seen him in days, no trackings, whatsoever. Not a single fingerprint of that fella anywhere in the place. I almost miss ’em. Kind ah…sort ah.

QUINN: Big Moe expired cause we ain’t had anything out for him to feed on.

EDIE: I ain’t happy till I see a corpse.

QUINN: What about that terrific odor we had in the kitchen last week?

QUINN: So? So? That’s the scent of rat death.

EDIE: How you know for sure?

QUINN: Cause I’ve seen and smelt rat death before and I know that that had to be Big Moe saying goodbye.

PETE: Will you two ever stop all that hollering?

EDIE: Did you sleep?

PETE: I’ll take it black. My head is pounding. Bad enough I’m stuck in here with the two of you. I look to my dreams for escape and you’re both there as well! Were you talkin’ about Big Moe?

QUINN: You did? Where?

PETE: Saw him combing the isles for food. He must be starving.

QUINN: You sure you wasn’t dreamin’ him up?

PETE: …Shit…wait a minute…now, I ain’t so sure…I was in one of those weird sleep states, where you’re kinda dreamin’ but kinda awake, so, now I don’t know for sure.

PETE: How you know? Caught in a trap?

QUINN: He’s too smart for them traps.

PETE: Why you make me buy ’em then?

QUINN: Cause the health board regulators say we have to show proof of exterminator.

EDIE: Let’s not get too excited.

QUINN: Told you I ain’t dumb.

EDIE: I won’t hold my breath.

PETE: Jesus, look at that. Scary sight. Hear that violent howling? Can’t see nothin’ out there.

A car explodes through a diner window and booth. QUE and SCHELP get out arguing.

QUE: I told you right, why you go left idiot?

QUE: This time I was sure cause my right arm has the beauty mark and when I looked down, that’s when I knew it was RIGHT!

SCHELP: You told me not to ever listen to your directions, so I didn’t and now we crashed.

QUE: But we’re in a SAANNDSSTORRM!!!

Que and Schelp notice everyone in the diner. 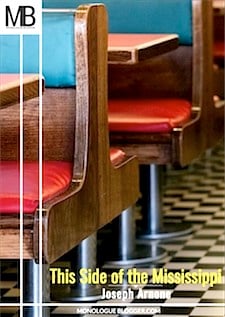 In this one-act play script, Quinn’s entire life gets changed from the encounter of two wild lover criminals, Schelp and Que.