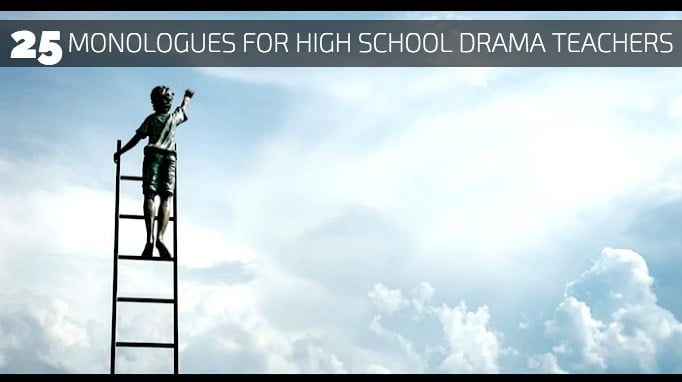 25 Monologues for High School Drama Teachers offers a powerful selection of monologues for young artists that teachers may use for drama study.

JUST SO YOU KNOW
Sally wishes she and her sister were friend but unfortunately it’s the complete opposite.

ACTING DIFFERENT
Cassandra and her boyfriend have been dating but his personality keep flipping.

VOICES IN THE TREES
Marina has a mental illness that her brother doesn’t seem to have an compassion for.

ANGEL PRAYERS
After attending her uncle’s funeral, Milani changed and started hanging out with the wrong group of kids.

THOSE DAYS ARE OVER
Marsha sticks up for herself in the face of her sister’s torment.

BUBBLE WORLD
Jasmine and her cousin talk about why they have grown apart from one another.

I’M NOT DUMB
Tabitha feels like the dumb kid at school and wants to know how she can fix that.

LICK MY WOUNDS
Crystal doesn’t want or need to be in a one-sided relationship with her boyfriend and lets him know that maybe it’s better they break up.

NO COMPARISON
Cordelia likes women and talks to her friend about not liking guys.

ONE-WAY CONVERSATION
Bella doesn’t know how to connect with her mother because she’s always being pushed aside.

PLEASE FORGIVE ME
Jesse comes from a troubled home and this puts major strain on his girlfriend.

PIT OF MY STOMACH
Nina wants her father to stop leading a criminal life.

POTATO HEAD
Ronda thinks her cousin has a problem with never wanting to go out and hang out with friends.

PROTECTIVE SHIELD
Rita is insecure but desires to change her weakness and become more social.

ROGER USED TO BE WILLY
Rosanna ran away from home because of her father’s strict ways.

SHADOWS OF MY MIND
Naomi visits her aunt to discuss how she needs to find a way to be more confident.

SENSE OF BELONGING
Beverly doesn’t fit in at school and attempts to find clarity when speaking to her mother.

SINCE CHILDHOOD
Zoe and Ricky have been best friend since childhood but Zoe has always been in love with Ricky.

SLY STATEMENTS
Melanie stands up for herself because she doesn’t like her boyfriend putting her down.

SOMETHING ELSE TAKES OVER
Taliya has anger management issues and needs to learn how to be less temperamental.

AFTER-SCHOOL ACTIVITIES
LaQuisha doesn’t want her mother bossing her around as her track & field coach.

TWO SHADES AWAY
Melanie always feels disconnected from the life she lives each day.