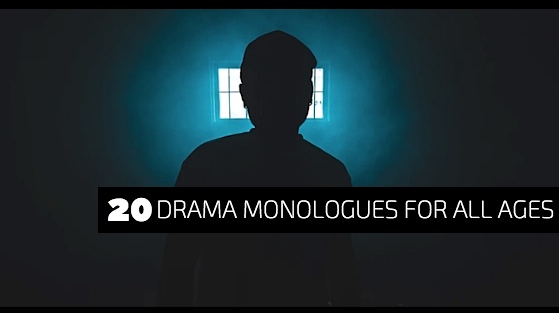 20 Drama Monologues for All Ages presents dark, edgy, tough monologue material for actors/creators/directors to use for creative projects.

Monologues have a running time of 1-2-3 minutes in length.

20 Drama Monologues for All Ages

FOUR SUMMERS AGO – female
Two sisters trying to find a way to patch up their past and start fresh.

DARK PLACE – male
Jeffrey receives visitation from a friend after he tried to kill someone.

DAMAGED GOODS – female
Avy is a fashion intern assisting a designer for a fashion show.  She meets a fashion reporter and the two embark on a friendship.

EVERY POSITION ON THE CHESSBOARD – male
A father coping with a troubled daughter.

WHEN THE COOKING IS DONE – female
Marza decides to change her life and stop playing maid to her family.

BOTTOM OF THE LADDER – male
A man tries to arrange a meet up with someone who is interested in buying his camera lenses.

PIZZA FROM CARLOS – female
Corky invades two strangers inside their apartment with free pizza in order to tell her story.

SOMEWHERE BETTER THAN HERE – male
Cram once had the potential to be someone great but blew his chances to have the life he now wishes he had.

WHAT EVER HAPPENED TO LUELLA BEANS – female
For years Rebecca has kept the painful truth from her daughter about what happened to her biological mother.

THERE WAS A TIME – male
Chuckie has big dreams, so big that he’s willing to risk it all with the savings he has accumulated with his wife.

SACK OF FEATHERS – female
Jackie and her daughter argue over the direction of the family business.

SHATTERED THOUGHTS – male
Jim and his soon to be wife have a horrid argument and things may have crossed the line.

CHOICE IN THE MATTER – female
Patricia was told to keep a secret but she spilled the beans to her husband and shattered her friendship.

ISOLATED ROMANCE – male
Victor is happy to have newfound success as a writer but doesn’t know how to manage fame.

INTO THE COLD NIGHT AIR WITH YOU – female
Linda watches as her boyfriend cheats on her with her closest friend.

QUALIFIED FOR THE JOB – male
Jack remains loyal to his boss in the face of her losing her company.

THE NEXT CHAPTER – female
Emily has come back after spending a year in California and having the worst experiences of her life.

FOOD ON THE TABLE – male
Chuck takes pride in his work at the warehouse but when he gets accused of theft he has to fight to hold on to his job.

SAND ANGELS – female
Lenora has convinced herself that her life has been nothing more than one boring ride.

STRIKING A CHORD FOR ROSANNA – male
Buck is a bounty hunter who has been hired to bring back a troubled young woman named Rosanna.