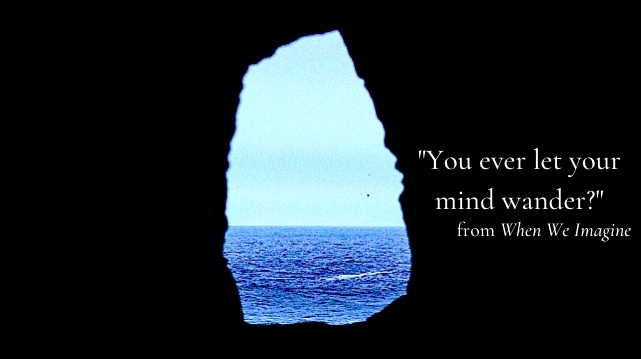 In teen drama scene from 1 act play script When We Imagine, Jesse and Felix discover that they both have feelings for one another.

JESSE: I come out here by myself sometimes, stare up at the moon from my float and imagine things.

FELIX: What you imagine?

JESSE: I imagine my Dad not being blind…Imagine my mom being a nice person…Recently, I imagined myself being a world famous inventor, like Einstein when he became famous for E=MC2; having that kind of impact on the world, doing something great for once…what d’you imagine?

JESSE: You don’t ever let your mind wander?

Jesse gets her float. She places it in the pool.

JESSE: Get on the float.

JESSE: Come on Felix. Get on my float and close your eyes.

JESSE: I want you to imagine.

FELIX: You messing with me?

Felix goes into the kiddie pool and climbs on top of the float.

FELIX: Imagine, what? How?

JESSE: Imagine a made up world.

FELIX: I don’t know how to do that.

JESSE: You know how video games have a made up world?

JESSE: Create one of them from your imagination.

JESSE: Okay, okay…imagine a beach, any beach, there’s no right or wrong beach cause it’s your beach, got it?

JESSE: Look around your beach, what do you see?

JESSE: NO, no, no..you’re just saying what you know exists at the beach…I want you to invent your own beach…what color is the ocean?

JESSE: Imagine your ocean being sky blue, like a rich, bright, deep ocean blue…got it?

JESSE: What color is the sand?

FELIX: The sand is brown.

FELIX: [email protected]%t…uh, how about orange?

JESSE: Orange sand is awesome. Now, what do you want to do at this beach?

FELIX: I wanna go surfing, but I never been surfing.

JESSE: Doesn’t matter. In your imagination you can go there! You can do anything!

FELIX: Should I try…?

JESSE: Go for it.

FELIX: The waves are massive.

JESSE: Make them even bigger.

FELIX: Everything below is so small.

Jesse leans in and kisses Felix.

Felix kisses her back. 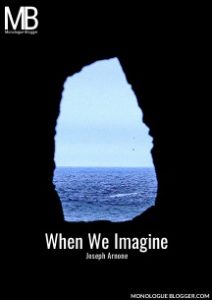 In the one act eplay, When We Imagine, Jesse and Felix are two misfits who become connected due to the similar lifestyles they both live and the troubles they secretly have at home.  2 Women, 2 Men.  Drama/Serio-comedy.