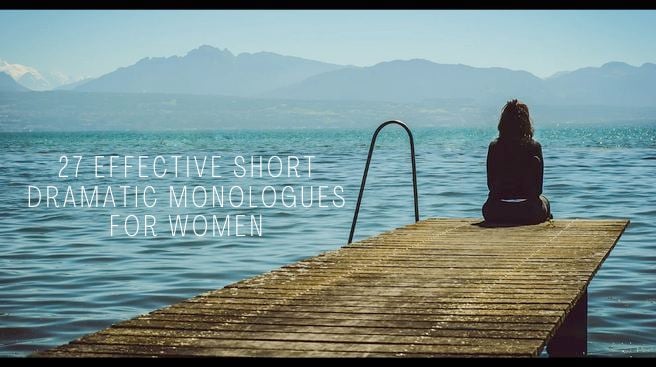 PROTECTIVE SHIELD
Rita opens up to her friend about how she doesn’t know how to talk without feeling nervous.

MY SIDE OF THINGS
Two sisters try to come together by making admissions.

TREAT ME NICE
Corinne wishes her mother for once would show some level of appreciation for how hard she works for her.

SMILE PRETTY, ALICE
A woman corners her neighbor to express her concern and disgust for her affairs.

I CAN’T WIN
A mother in battle with her daughter over the man she’s dating.

NO COMPARISON
Cordelia struggles with guys coming on to her when all she wants to do is remain attractive for women.

CONTENTS FLAMMABLE
A mother who suffered a tragedy and blames herself for it.

OUR LITTLE SECRET
Helen is concerned about her daughter’s eating habits.

STOP PLAYING THE VICTIM
Sally would like to see her friend be more positive minded rather than always negative.

DARLING FACE
Beverly is bored stiff and believes the only way she can become happy is if her husband built a rocket ship.

PAY ATTENTION
Linda and a cab driver find a mutual connection and solace when Linda discovers her man has been cheating on her.

JUST A CRACK
Rayla and her boyfriend are looking to break up but some major news may be the reason for them to finally get their act together.

BEAUTIFUL DAY
All this woman wants is to feel beautiful and she doubts that she ever will but when engaged in conversation with a stranger she begins to look at herself differently.

COFFEE TABLE
A woman remains safe and sound inside a mental institution but is everything what it seems?

DEAD WEIGHT
Tia has always had a thing for Cris but she never got too close because of his addictions.  Now that he’s moving away she works up the nerve to tell him how she feels, about everything.

FOUR SUMMERS AGO
Evandra and her sister Selene used to be so close but as time moved on so did their closeness.

SACK OF FEATHERS
Jackie and her daughter Henrietta argue over the direction of the family business.

BETTER VERSION OF JENNY
Jenny has become what you call a party animal with no shame in her game but something has finally made the light bulb go off in her head but it may be too late.

FOOD FOR THOUGHT
Kelly confides in her friend Paula about how she thinks their mutual friend is stealing her creative mojo.

NEGATIVE ENERGY
Rose is infuriated when asked to allow her roommate’s sister to move into her apartment.

CHOICE IN THE MATTER
Patricia begs for Cheri’s forgiveness because she was supposed to keep a secret she told her husband and someone else overheard and now it’s made public.

AGREE TO DISAGREE
Harpa believe that her friend needs to be more forthcoming and honest if they are to be good friends.

WHEN THE COOKING IS DONE
Marza wants to break free from herself and the family around her that bring her down.

BEHIND THE EIGHT BALL
Helena is down about her struggles to try and carve out a substantial life for herself on her own merit.