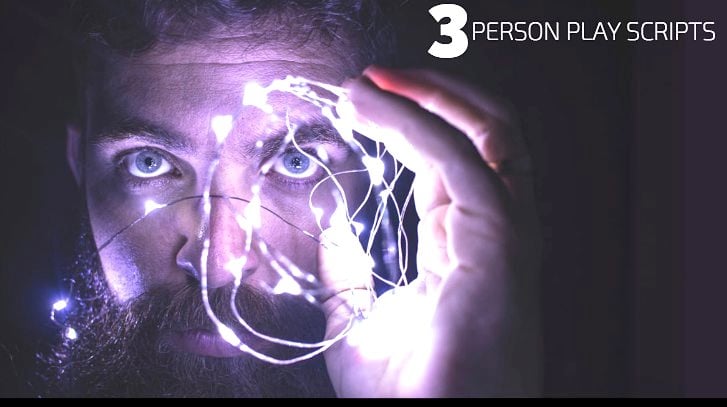 Here’s 3 Person Play Scripts for Actors for creatives looking for stories with three or more characters.  You will find both comedy/drama.

AT THE END OF THE DRIVEWAY
A father returns home fresh out of prison to meet his son for the very first time.

EMBERS THAT REMAIN
Dallas makes final arrangements to part ways with the business she is being forced out of but her community shows her support.

THEM CANDLES
For the first time in Kendra’s young adult life she feels alive from the young man she has recently met.

FISHIN’ FOR MISERY
A filmmaker who is down on his luck and lacking inspiration tries to come to grip with his demons.

A SHADE OR TWO DARKER
A period piece surrounding racism within the triangle of a small family.

EVEN THE COLOR BLUE
Johan has finally mustered the courage to come out to his parents only to find out before he does that his father is seriously ill.

BEER AND BOBBY’S LASAGNA
IN the midst of helping his friend move, Kutch suffers from bad stomach pains and explains the reason why.

DRINKS ON THE HOUSE
A father visits his daughter after years have gone by to tell her that he is dying.

HIGH PLACES
A look at young love persisting despite the obstacles that stand in their way.

AN ALIEN KEEPS STEALING MY BEER
Noel has a plan to capture the little Alien that he believes keeps raiding his fridge full of beers.

RAY RAY’S STORYBOOK
A troubled man and the cousin that’s always bailing him out.

PIZZA FROM CARLOS
A woman shows up at a strangers apartment sharing passionate stories about her life while eating pizza.

MOMMA, I’M NO FOOL
Daphne fins her biological father and is about to meet him but first she has to confront her mother.

VOICES IN THE TREES
Marina hears voices and sees things and nobody in her family believes her.

CONTENTS FLAMMABLE
In this therapy session the moderator shares her own painful story of losing her son.

DEAD MEMORY
Bruce is out from jail and seeks his revenge on the man he believes killed the woman he loved.

WINTER WILL NEVER END
Jason begins to realize that the woman he has always been in love with may not have been right for him all along.

GATOR’S FURY
Holt talks to a long time companion that happens to be an alligator.

TINA, HANK, HANK, TINA
Hank meets his brother who is in dire need of help and while he is there he gets introduced to a woman that makes matters worse.

Find original scenes to work on.