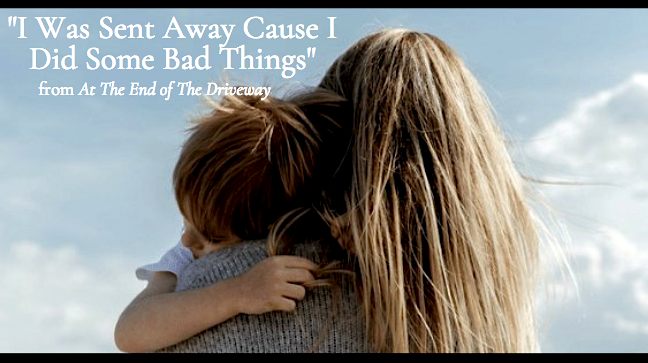 A drama scene from one-act eplay, At The End of The Driveway.  A father fresh out of jail wishes to see his son for the first time.

JAGGER: You ah, you ever go fishin’?

JAGGER: Uh, well, I brought some fishing poles with me over there at the end of the driveway…you ah, you, we can go fishin’ together, I can show you how to fish and all.

CHARLIE looks at his mother and she nods.

CHARLIE: Are you my Daddy?

CHARLIE: Where you been?

JAGGER: Oh, well, I was sent away cause I did some bad things that I got into trouble for and so I had to go away to, to, to pay for those bad things I committed and now I am free and I’m no longer in trouble and I want to get to know you and become friends with ya.

CHARLIE shrugs his shoulders and walks to the end of the driveway and tampers with the fishing poles.

MARGARET: He really is.

MARGARET: It needs immediate attention. Doctors scheduled him as early as possible.

MARGARET: We don’t know for sure. Fifty-fifty.

JAGGER: I want to be there, Marge…please.

MARGARET: You can be there.

JAGGER: I’m gonna take him down to the creek. Won’t be long.

MARGARET: You gotta carry him on your shoulders.

MARGARET: Cause he can’t, you know—

JAGGER joins his son CHARLIE at the end of the driveway.

In this one-act eplay, Jagger is fresh out of jail and wishes to see his son Charlie, but his ex-girlfriend Margaret gives him a hard time about it.