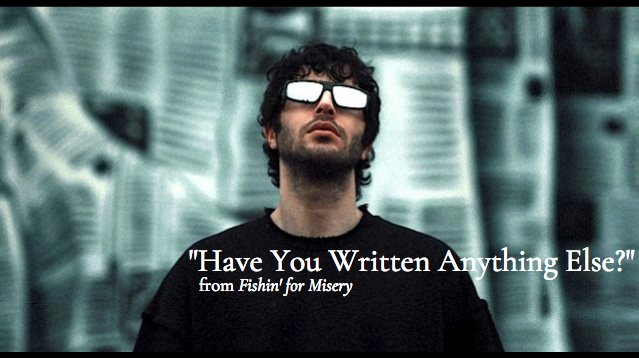 An indie filmmaker is having a creative dry spell and meets his friend at his local bar in the 1 act comedy eplay Fishin’ for Misery.

NICKY: Have you written anything else?

MAX: I have but nothing as good as The Fish Takes The Cheese man. It’s brilliant.

NICKY: Change the title and send it back out.

MAX: That’s like me asking you to change your face Nicky. The title is everything.

NICKY: Can I ask you something?

NICKY: What does The Fish Takes The Cheese even mean, bro?

MAX: The fish is the sneaky character in the film and the cheese represents the money and so the fish swindles the money.

MAX: It’s not a f’cking comedy man! How many times…? The movie is a dark crime thriller.

NICKY: Sounds like one of those stupid comedy type films or something.

MAX: I’m trying to be original, do something different, alright? That’s my problem, no one ever understands me. If they took the time, they would see just how good my sh’t really is. We smoking weed or what man? I’m about to explode!

NICKY: Let’s finish our drinks and go to my garage. I got you.

NICKY: Sh’t man, alright…I don’t know though, that movie, something about that title is botherin’ me, I don’t think anyone is gonna read the script Max, with a title like that…

MAX: What’s bothering you about it? Come on, Nicky, it’s a f’ckng title!

NICKY: Yeh but, if someone sent me a script with that title, i’m not so sure i’m gonna read it like…

MAX: Alright…let’s get out of here…I mean, maybe you’re right Nicky, maybe you got a point.

NICKY downs his beer. NICKY puts money on counter, waves to CHARLES the BARTENDER who
waves back.

NICKY and MAX exit the bar. 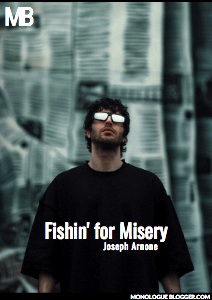 In the comedy one act eplay Fishin’ for Misery, Max is a filmmaker down on his luck and can’t get a script backed by anyone in Hollywood.  He confides in his friend Nicky at their usual hangout bar.  1 Woman, 2 Men.  Comedy/Serio-Comedy.