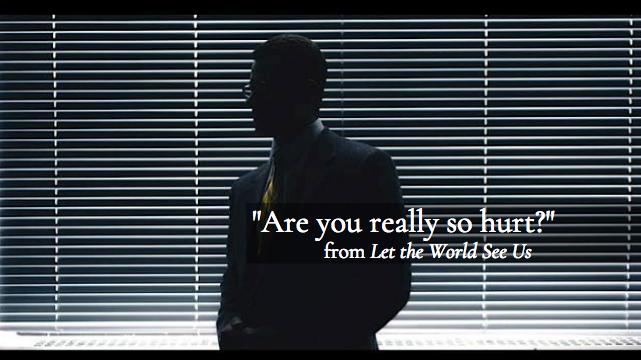 “Are you really so hurt?”  is the starting point for this scene excerpt taken from the one act play Let the World See Us.

SIMON: Are you really so hurt?

CYRUS stares SIMON in the eyes.

SIMON goes to the bar and makes two drinks. He hands one to CYRUS.

Why didn’t you ever marry my mother?

CYRUS: I wanted to marry her. She didn’t want to go ahead, too afraid of what you’d all think of her. I don’t blame her, it was a different time, things have changed now…how time changes us.

SIMON: You should have married her.

CYRUS: I PROPOSED Simon!…she didn’t accept! We kept on and it became what it became, our own unusual relationship…hidden away from the rest of the world. I wanted to show her off to everyone, to feel alive with her by my side, let the world see us, for what we were, two women in love…afraid…

SIMON: I visited her grave yesterday…

CYRUS: Is that what this is all about?

SIMON: It always seems to open up wounds, makes me think deeply about her, about my own life, memories…unfulfilled promises, could have beens along the way and more…gets me tangled up inside at times.

SIMON: So am I Cyrus, I’m sorry you lost her. (pause.) I’d like to…I just want to stay here in my office, like this and not see anyone. Can you turn Martin and Donavin away for me, please tell them I’ve caught some stomach virus and won’t be around for a few days. Nothing for them to be alarmed about.

CYRUS: I’m not certain that will be a good idea.

SIMON: I didn’t invite them and I’m not in the mood for them. In fact, I was considering having them removed entirely from the board. I think we should take over the board, one by one, make them an offer, close them down for good.

CYRUS: Are you thinking clearly because you sound like you’ve lost your mind?

SIMON: I want full ownership of my company, Cyrus. We’ve gotten to where we needed to get and now we don’t need the mischievous seven.

CYRUS: I don’t think you know what you are really saying.

SIMON: I am all too clear about what I’m saying. You and I both know that they are dirty rotten scoundrels. The kind of men I can’t stand. The fact that I’ve even had them involved to begin with was because it was your idea, which, at the time was a smart one, but now expired.

CYRUS: They will never agree to their removal.

SIMON: That’s what lawyers are for.

CYRUS: It will break up the entire company, Simon.

SIMON: It is my company! I want them all out! 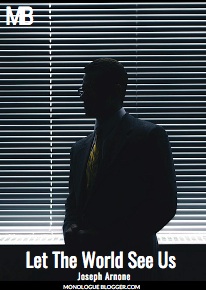 In the one act eplay Let The World See Us, Cyrus tries talking Simon out of removing the entire board of his company because she fears terrible circumstances in response.  1 Woman, 1 Man.  Drama.