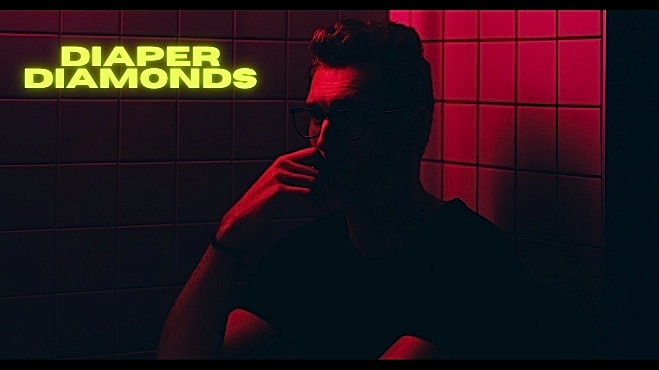 Diaper Diamonds is a comedy script.  Dan loses hidden diamonds and argues with his wife Zoey before crime lord Izzy shows up at their doorstep.

A panicked yet restrained Dan enters the living room.

DAN:  Hey Zo, where’d you go and put all the baby diapers?

ZOEY:  Baby diapers?  You mean those things used for babies to go to the bathroom in?

ZOEY:  Oh those!  (sarcastic chuckle)   We’re all out of baby diapers, Dan.

DAN:  But there was a whole stack of ’em.

ZOEY:  You must be dreamin’.

ZOEY:  I stopped using baby diapers, Dan.  We ain’t got the money to buy new ones, Dan.  I been wrapping Chloe in t-shirts and bandannas, Dan.

DAN:  But I left an unused baby diaper where I keep my socks.

ZOEY:  I already found it and used it.

DAN:  You used the baby diaper that was in my sock draw?

ZOEY:  It’s a baby diaper you son of a bitch.  Course I used it.

ZOEY:  What’s gotten into you?

DAN:  That was our pay day.

DAN:  The stash Zoey, the–that’s where I hid the diamonds!

ZOEY:  Hold up!  You telling me that you hid the diamonds in our baby girl’s diaper?

ZOEY:  And you didn’t tell me?

ZOEY:  You are so stupid!  I didn’t know they could pile stupid as high as you.  Look at ya in all your stupid glory!  In a diaper?  Out of all the hiding places on planet Earth, you go and choose a diaper to hide diamonds?!

Dan takes the garbage and dumps its contents across the floor.

ZOEY:  What the hell are you doing?!

Dan begins tearing open a dirty diaper which suddenly explodes all over him like a grenade.

Dan desperately looks for the diamonds and finds another diaper.  He tears into this one as well.

Zoey and Dan begin gagging as they continue to argue.

Dan takes off his dirty shirt.  He washes his hands in the sink.

DAN:  WHY DIDN’T YOU SAY SOMETHING before I started going through DIRTY DIAPERS?!

ZOEY:  You better clean up this mess before you die then.

DAN:  Zoey, I’m really a dead man.  I just got off the phone with Izzy.  He’s on his way to pick up the diamonds, which we don’t have.

ZOEY:  What you mean WE?  Don’t start on that WE business.  You mean YOU!  YOU!  YOU the one that put diamonds in a dirty diaper.  You the one that—

DAN:  It was a clean diaper!

DAN:  It got soiled cause you put it on our baby girl!  You think a diaper just magically walked itself into my sock draw?  Didn’t it cross your mind to question why there was a diaper in my sock draw in the first place?!  That’s the problem with you, no common sense!

ZOEY:  Don’t you dare talk to me about common sense.

DAN:  It never occurred to you, right?

ZOEY:  You are clueless!

Izzy knocks on the front door.  He’s already been standing inside the house watching unnoticed the entire time.

IZZY:  Dan the man.  You always liked that nickname, huh?  Dan the man.  A superficial phrase meant to instill confidence in someone’s ability to be reliable or trustworthy or responsible.  A term that makes one feel there’s some sort of track record for being “the man”…I believe it’s an outdated phrase and wounds the very fabric of our ever evolving society and its most meaningful needs.  But I digress…Dan should just be Dan.  Same way Zoey is Zoey or your daughter Chloe is Chloe.  But yet again nicknames were how we used to define who we were going back many, many, many centuries ago…people were named based on their particular character or what they did for a living and over time a person would be designated a surname that fit a person’s special attributes.  Take the name Arnold.  It is said that Arnold had its roots in Dutch, German and English.  The ARN means “eagle” and the OLD bit means “power or rule”.  Hence you get the name eagle power, which could mean that someone was a fantastic hunter or ruled over a people or land as strong as an eagle.  Did you know my middle name is Arnold?

Dan and Zoey look at one another dumbfounded.

IZZY:   Don’t you find that interesting?

ZOEY:  …I do..I find that interesting.

ZOEY:  I think I hear my baby crying.

Zoey runs out of the room and into the bedroom, slamming the door and locking it.

IZZY:  That’s extremely kind of you but the smell of shit permeates my nostrils at the moment.

IZZY:  Sorry for what?

DAN:  …I lost the diamonds man.

DAN:  I’m so sorry I lost the diamonds, I hid them in a diaper and—

IZZY:  You sure did but more importantly you let yourself down Dan.  How does that make you feel?

IZZY:  And what else?

IZZY:  And what else?

IZZY:  Those are good adjectives.

IZZY:  Of course not.

DAN:  Are you gonna kill me?

IZZY:  The worst thing a man can do in life is let himself down.

IZZY:  There isn’t a damn thing worse in life than regret.  The things one could have done but didn’t.

DAN:  But aren’t you gonna—

IZZY:  It eats at ya.  It stings your soul.  Kind of makes you wish you weren’t even born.   Well, that’s that.  I got a flight I need to catch in an hour’s time.  My wife’s throwing me a big birthday bash in Australia.

IZZY:  That’s mighty kind of you.

DAN:  Never been to Australia.

IZZY:  Neither have I.

IZZY:  That’s a crying shame..almost feel bad for ya…if only your brain was developed enough to see all the hard work I’ve done throughout the years to get to where I am now…maybe you would have thought differently about those diamonds.  WELL, I better get going before my wife throws a fit.  Nothing she hates more than tardiness.

DAN:  Does this mean…you know, do I have to worry?

IZZY:  Worry about what?

DAN:   Worry about you know…dying and stuff?

IZZY:  We all have to worry about one day dying Dan.

IZZY:  Stand?  Well, you pose a good question.  If I were in your shoes right about now, I’d probably be wondering what in the world was going to happen to me.  Ha, ha.  I mean, am I right?

DAN:  Are you going to have me killed or let me go?

IZZY:  Tell you what?

IZZY:  Erase you?   That’s a new term.  (beat)  It’s best you let me catch my flight and let dead dogs rest where they are…

Izzy makes his way out of the front door but stops, without turning.

IZZY:  …But if you happen to find those diamonds…

Izzy walks out of the front door.