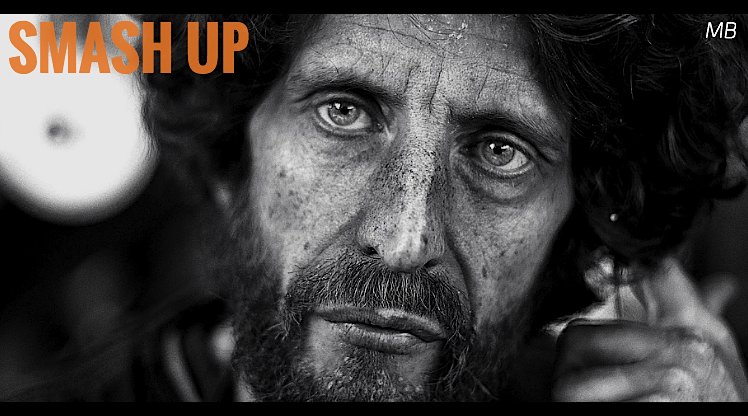 Smash Up is a short dramatic scripted scene for 1 woman and 1 man.  This script is considered a Crime Drama and runs about 5-10 minutes long.

MAZDA sits behind a desk in a corner.  CHITO has the run of the living room as he postures.

Mazda: What is it with you?

Chito: It’s hard out there.

Mazda: It’s harder in here. You know who I have to deal with… (Mazda eyes him) If you don’t start coming around a bit more often and with more meat on the bone, it’s gonna come down hard on both of us. Got it?

Chito: I know the rules.

Chito: I’m serious. I know I can’t fly straight but I’m trying to at least get from point a to point b. Nothing I do seems to be working out.

Mazda: Look, if you make your due on time and make it to the end, you are free to go. No one will care what you do from there.

Chito: Can’t you talk to him?

Mazda: And say what?

Chito: Talk to him…

Mazda: A deal’s a deal, you know that.

Chito: I don’t think I can get through.

Chito: I can think whatever I want. Ain’t no harm in that.

Mazda: No harm till you get yourself smashed up.

Chito: I’m already smashed up. My whole damn life is one great smash up.

Mazda: You know I hate you but I like ya. The only reason you’re still here.

Chito: Well, I appreciate it. Don’t think I don’t.

Mazda: Then when you come here, come prepared.

Mazda: That’s if you’re jammed up. Tired of making up excuses for you. I can’t keep covering you. You will go long before me, just know that.

Chito: I know for chrissakes. I don’t need more threats. I have enough of them already.

Mazda: I don’t give a care what else you got running around loose in your life, if you still want to be here you best do right.

Chito: I don’t want to be here, that’s my issue.

Mazda: Lay claim to it elsewhere, I ain’t your therapist. What’s wrong with you men lately? All going around feeling sorry for yourselves. Ain’t one day where I don’t catch one of you moping around tearing up in a corner like a lonesome harry. When I was growing up my Daddy was tough as nails. He’d give anyone a whippin’ drop of a hat and not think twice about it. Men today are all hesitation. You’re all hesitating and walking on your tippy toes. Society needs more lions, fierce angry predators. We’re living in soft times where talk is talk and action never comes of it.

Chito: I sure as hell ain’t never shed no tear in front of you that’s for sure.

Mazda: But you’re always complaining and lethargic like an old couch, just bbrrrrrrruuuhhhhh each time I see you.

Chito starts clapping his hands together and then looks at his palms.

Mazda: I like when I hear them buzzing. Breaks up my day and doesn’t make me feel as alone.

Chito: I have things lined up. I’m not out there moaning all day feeling sorry for myself like you imagine.

Mazda: Not just you, most all fellas who come up here.

Chito: Yeah, well, I ain’t one of them saps a shit you talking about. I have plans. A few plans. I have a few different things all going on at once cause I’m a diversifier.

Chito: I’m somebody who multitasks.

Mazda: I’m in the school of life sonny, that’s all the schooling I need.

Chito: Make sure you take me out of the wolf pack. I’m a lone wolf. Make my own way. Once a few of my MANeuvers (says the word man to be sarcastic) works out, I’ll be walking high and way gone.

Mazda: Where you going to?

Chito: In a land far far away…

Mazda: I ain’t mocking you, darling.

Chito: I want you to believe me.

Chito: I don’t know if I believe you.

Mazda: Who cares what I think?

A life of bad luck and poor timing…always looking for one leg up and then I be alright. Just one inch man. That’s all a brother ever needs…one single inch.

Mazda: Hey, can I ask you something stupid?

Mazda: What in the world ever happen to that gum business you had? Didn’t you have some sort of gum ball business?

Chito: It was a gum ball machine.

Chito: You know when you put change in the machine and out comes a gum ball that you can chew.

Chito: No where. A local boy got caught up with it. He lived down near Bennie’s Deli and would buy up loads of gum balls cause he was into some sort of sculpture making thing, I don’t know, he was on the news—

Chito: Yeah, he was using my gum balls to make gum sculptures he called it.

Chito: Yeah. That was the boy who died. They found him dead…choked out on my gum…things closed down after that.

Mazda: I ain’t never put two and two together. I never would have asked…I heard you was in business is the only reason I asked but I didn’t know.

Chito: I had other businesses but none worth bragging about. Things was good for a minute there, especially after being on the news. I was being branded for free! But things ended abruptly soon after that.

Mazda: You ain’t never done nothing else since?

Chito: I have. You have to. Nothings ever perked up since, really.

Mazda: I get you.

Chito: Yeah…I’m only hoping something comes around to set me out of my own skin and into the world again. Anyway, I better quit while Im ahead seeing as you gonna label me and all.

Mazda: No, you ain’t like them other boys. I didn’t mean what I say.

Chito: Truth is, I am. But maybe one day I won’t be anymore. That’s what I’m hoping for.

Mazda: It will happen. Can’t lose hope. We’re all wanting something to happen. What do we got without thinking better?

Chito: Right. (beat) I’ll try to be back here next week as discussed.

Mazda: Alright….well, listen, if you need more time in between, like, maybe you can come once every two weeks consistently, instead of once a week sporadically…would that help?

Chito: …Give my regards.