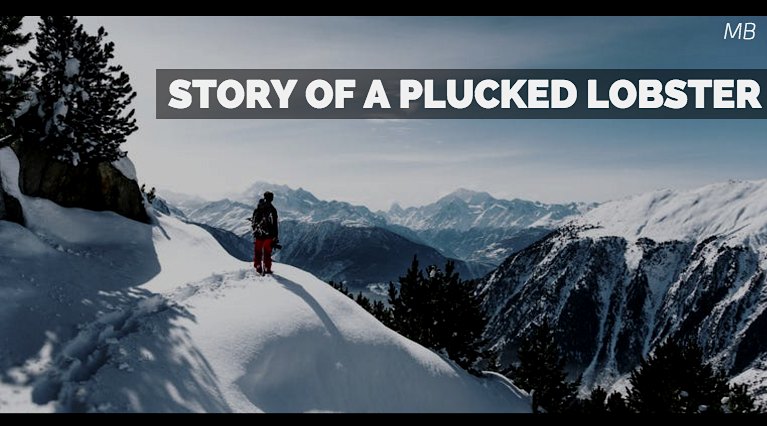 A brief dramatic scene for one man and one woman, taking place high in the mountains during a blistering winter season. Two lovers, alone in a cabin.

Story of a Plucked Lobster

WALTONG enters the front of the cabin covered in snow. BARB looks on weakly.

WALTONG: I fired off two this time.

BARB: You were gone for so long.

WALTONG: I know, I know. I covered as much ground as I could. I found a high spot, further out than I—much further out but I made it there and back in decent time.

BARB: To the minute.

(they both softly laugh)

WALTONG: (looks at stove) You didn’t have to put anything on, honey.

(Waltong kneels down beside Barb)

WALTONG: So, how’s my girl?

BARB: I had some…not much, but some.

WALTONG: Maybe it’s better if you force out the cough. Really belt it out so you can clear some mucus.

BARB: That’s okay. I can only get so much breath in.

WALTONG: Keep those covers on you.  Want some tea?

I’m sorry I got you into this mess.

WALTONG: You want to steam again? (beat) Maybe if we steam again, it will open you up some more?

BARB: Should we try?

(Waltong helps Barb up to her feet. He guides her over to the stove and places a towel over her head. Barb hovers over a hot pot of water, allowing for steam to enter her chest.)

WALTONG: When I was out traveling upon the ridge. There was a long time when every step I took toward it, seemed to take me further away. As if I was walking backward…so, I started jogging, which was the last thing I wanted to do but the most important decision I believe I made. I kept running and running, kept thinking about you and running and running and I completely zoned out. Suddenly, I found myself standing atop the ridge. You okay?

WALTONG: And I, I thanked my lucky star I made it to the top. (beat) When you get better I’m gonna take you to that very spot. It was spectacular. One of the most beautiful sights my eyes have ever seen. It was calming…so calming, as if nature was soothing me, saying it’s gonna be alright…

(He wakes towel off Barb’s head)

WALTONG: You don’t know what a plucked lobster is? That’s a combination of a plucked chicken and a red lobster.

WALTONG: Come on, let me get you back to sitting down.

(Barb clutches on to Waltong. Waltong does his best to be gentle and loving)

BARB: Have your soup. Getting cold.

WALTONG: After I get you nice and cozy darling. Nice and cozy. Wrap you up nice and…Barb? BARB?!

WALTONG: Okay…okay, you rest…you rest now and I’m sure a rescue team is on their way. They’ll be here soon. We’ll hear those choppers coming for us way in the distance and it will be the greatest sound—

(Barb coughs wildly and then calms and faints)

(Waltong sits at the table touching his soup but staring at Barb.)