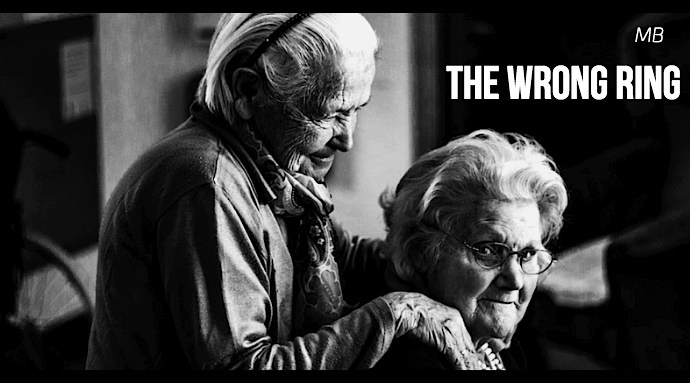 BERNICE, age 90 and PATSY age 87 are at a Funeral Parlor saying their final goodbyes to their mutual best friend who rests in the coffin.  3 woman, 1 man.

Bernice starts fiddling with a ring on Bette’s finger.

Patsy: What are you doing Bernice?

Bernice: I’m just…just looking at it.

Bernice: Will you relax?

Bernice struggles to remove the ring.

Bernice: Does it look as if she cares?

Patsy: It’s what she has asked to be buried with!

Bernice: Listen Patsy, we all ask to be buried with ‘things’. Things, things things! You know Pat, we were friends for years. If there was anyone that she would have wanted to wear this ring, it would’ve been me. She couldn’t stand that selfish daughter of hers, nor could she fathom good old Bob, who left for Arizona for a whole year to live on a ranch with horses! And he knew she couldn’t stand horses—

Patsy: Will you shut up?!  That’s not the point Bernice! She has stated clearly in this letter that she’s wanted to be buried with it.

Bernice: She stated many things that she never meant.  She was a pathological liar.  Let’s not forget!

Bette’s husband BOB enters the Parlor and begins to walk toward the ‘girls’.

Patsy: Having a good day so far?

Bob: What, are you crazy?

Patsy: Oh…I don’t mean, I mean…do you feel the presence of God in the room?  (she darts a look to Bernice)

Bob: Yes, I’ve come to give Bette the ring she deserved.

Bob: I have it here, the real diamond. I took out a mortgage on our house and…

Bernice: You mean the ring she was wearing all these years wasn’t real?

Bernice: What are you saying Bob? I almost don’t believe it?

Bob: I…I couldn’t afford a real one at the time.

Bernice: You couldn’t afford— (Bernice has trouble controlling herself) Bette wore that ring to every beauty pageant throughout the years, she wore it to the diamond girl beauty pageant at 60!!! She picked up that award with your ring on Bob!! She wore it to Sheila’s wedding, to Donald’s Barmitzvah, To Elena’s 100th, TO HAROLD’S DEATH BED!! She wore it! She wore it and we star gazed over this DAMN RING!

Bernice holds up her hand to prove her point, revealing the shiny big diamond ring on her finger.

Bob turn to address the crowd in the funeral parlor.

Bob: She’s, she’s got the ring on. Bernice has Bette’s ring.

The crowd claps in approval.

(to Bernice) Why in the damned hell are you wearing Bette’s ring?

Bernice: Patsy gave it to me.

Bernice: Patsy’s getting senile Bob, she’s nearly as old as me. Here is what happened. Bette told Patsy that she wanted to give me the ring as her last dying wish.

Bob: But I read in the letter Patsy showed me that she wanted to be buried with it on.

Bernice: I will tell you now Bob, that wasn’t her real wish. okay?  She verbalized it to Patsy cause she had a change of heart and could no longer write!  Now if you give her that ring, she’ll hate you forever. You know how she loved me Bob?

Bob: I know…she mentioned it once…but…where is the letter?

Bernice: I’m telling you now it doesn’t matter.  She told Patsy on her deathbed that she wanted me to have the ring. Patsy gave me the ring and I’ve had it on since!

Bob: Is that true Patsy?

That can’t be, I could have sworn I saw the ring on her finger this morning!

Bernice: Oh will you stop causing such an ugly stink.

Bob puts the other ring on one of Bernice’s fingers.

Would you mind handing me back the other ring?

Bernice hands the ring to Bob.  Bob walks away in haste.

But where is he going in such a rush?

Sheila: Hello ladies, where is Bob going?  I went to say hi and he rushed right past me?

Sheila: He still owes my son money for the ring.  I hope he’s not avoiding me.

Sheila: He came by the shop just last week and I helped him choose a ring, nothing expensive really, we let him take it out of the store but he is yet to come back and pay us for it.

Patsy: He bought a ring?

Sheila: Yeah, he wouldn’t say for what but who knows.

Patsy and Bernice look at one another in disbelief.

Bernice: This wasn’t the ring was it?

Sheila: Oh my!  I don’t believe it.  That looks like the very one!

Patsy: (to Bernice) I just put two and two together.  I think Bette’s ring was the real ring all along and Bob planned on switching them.  He gave you the fake and he’s got the real ring now!

Bernice: It can’t be?

Sheila: Can’t be what?

Bernice: I’m gonna get him!

Bernice takes off walking and Patsy follows her in hot pursuit.