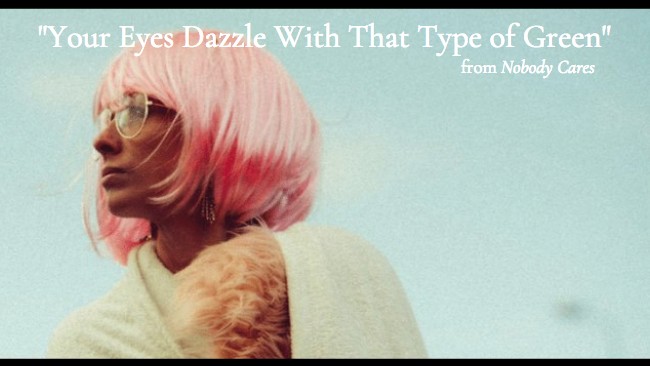 Sally goes shopping with her boyfriend only to be terrorized by the store sales rep in this one-act comedy play, Nobody Cares.

MAGGIE: Brings out your eyes. Your eyes dazzle with that type of green. My gosh, they POP! No, really, they pop. Outrageous.

SALLY: Gee, thanks. (smiling) This hat does bring out my eyes…

MAGGIE: Gleaming, first thing I noticed as I was walking passed you. It was like a magnet pull right to those big bright green eyes you have.

SALLY: Aww, thank you so much.

MAGGIE: You know what would look great with that green hat?

MAGGIE: THIS. (she pulls out a green satin scarf). How about THIS? Alright? Do I know how to pick them or don’t I? It’s destiny. FATE. I was just about to walk this puppy back to its rightful place on the shelf, but no can do missy, this one’s YOURS.

SALLY wraps the scarf around her neck.

MAGGIE: BINGO! I knew it. Can’t be denied. It’s like its maker died for you personally.

SALLY poses in the mirror.

SALLY: It matches so well.

SALLY is startled on MAGGIE’S POP.

MAGGIE: Gets you excited, right?

MAGGIE: Makes you want to jump up and down. 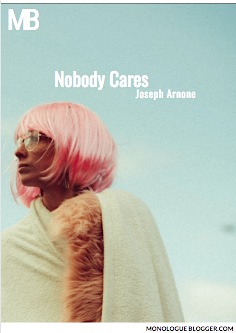 In the one act eplay Nobody Cares, Rick waits patiently for his wife to try on a hat that is half their rent. Turns out to be a battle between Rick and the sales representative Maggie for Sally’s true happiness. 2 Women, 1 Man. Comedy.