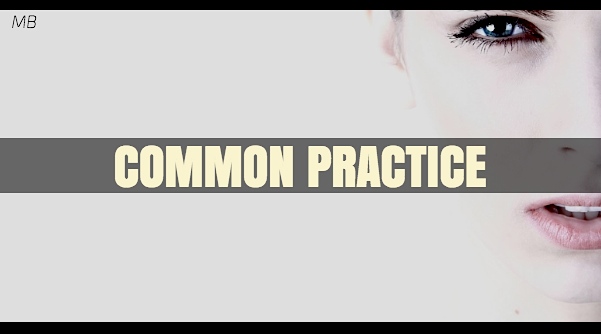 Here is a short comedy called Common Practice.  MARLA instructs JANE on how to keep her man within her control so that they may have a long lasting marriage.

Jane: I admire you.  I do, I really do.  How you and your husband have been together for so long.  I can only hope the same can be for me.

Marla: You don’t know the half of it child.  I have my husband wrapped around my thumb.  (beat) Don’t look so shocked.  It’s natural.

Jane: I’m not so sure I understand.

Marla: Do you really want to know?

Marla: Do you really want to know why Paul is the way he is?

Marla: He’s been trained.  Paul was never the way he is now when I first met him.  When I first met him he was full of fire and chic, always had a buzz about him but overtime I calmed him down and positioned him to my specifications.  (beat)  Can I tell you a secret?

Marla: It’s a sadistic secret.  (beat) I kind of like giving him a hard time.

Marla: There’s something about it, the way he gets when I push his buttons…I get into it.

Marla: Yeah, it kind of gives me a ride, a thrill to see him get all hot under the collar.

Marla: I know I am.  Never said I wasn’t but the truth is the truth.  Point of fact is that I just love getting him mad.  I can’t help myself.  A girl’s got to entertain herself or else the marriage falls apart.  How do you possibly think I’ve actually put up with Paul for so long?

Jane: Is that the trick, to find private ways of entertaining yourself?

Marla: It works for me.  Cruelty is a guilty pleasure. Now, I’m not talking nothing more than seeing him get…well, I kind of love it when he takes a certain tone with me.

Marla: He gets this tone in his voice when I’ve reached his line…like ah, “Alright now Marla, that’s enough.”  Haha.  It drives me wild.

Marla: There are times when I must say I play his fiddle like a Goddamn master conductor. I get him to hit all my notes.  It’s a gift.  Even I don’t know how I do it.

Marla: It’s a mood.  I have to be in the right mood.  And the timing, the timing has to be right.  So, if I’m in the mood to be a little devil, which is my usual state of self and I see he’s having a better than usual day, I strike.  I sink my dirty tiny claws into his large back and I chew down.  I don’t stop nibbling until I hear him say ouch!

Marla: You’ve got to work around it.  I’m telling you.  If you don’t start playing notes now, I give you two five more years at best.

Jane: There are other things that make us happy, I mean, we’re not unhappy.

Marla: Ha!  Give it time.  True misery takes time to seep in and drown you.

Marla: Absolutely.  When he comes home from work and he goes on about his long day, interject.

Jane: Just cut him off?

Marla: Mid sentence.  Don’t give him no fuss about it, just do it as if it’s normal.

Marla:  Oh yeah.  I’ll show you.  Say something, anything.

Jane: Okay.  Ummm, well, I’m really listening to you because I want—

Marla: Hahaha and that is good darling.  Want some potatoes?  You see?  Just like that.

Jane: Do you want to go to the theatre this Friday?

Marla: That was good.

Marla: That was pretty damn good.  Start on him immediately.  Now, once you got this whole interjecting thing down, it will become common.  At first, he’ll get annoyed, he may even be ready to argue, but you must be coy and pleasant and polite and smart.  In a word, INNOCENT.  You wear him down and eventually, eventually it will become common practice.  That’s when you will finally have your hold over him.

Jane: Marla?  I really had no idea this sort of thing in marriage even existed?

Marla: Do you want to keep your man or not?

Marla: Then believe what I’m telling you.  I’ve seen too many breakups with no makeups and families destroyed all because the woman wasn’t wise enough to manage her husband effectively.

Jane: I’m amazed.  I must say this to you Marla, I don’t know what I would do without you.  You are truly like a big sister to me.  I’m so thankful we’ve moved into this development and have you as my neighbor.  Talk about luck.

Marla: Now, now, there, it’s fate and the good news is that if you learn to play the fiddle now, you will have a marriage that will withstand time.  That’s how you win.  Get this first bit down and then I will help you mold him further and believe me, you will be all set.