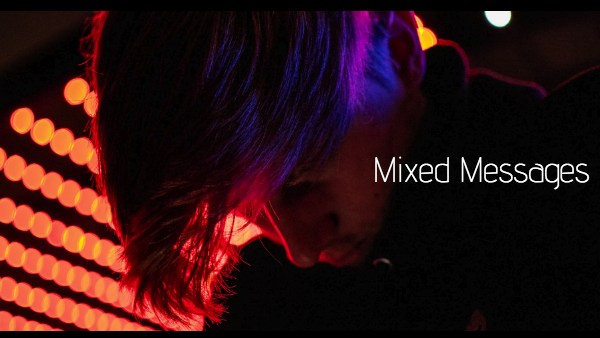 In Mixed Messages, 2 criminal brothers are fleeing the scene of a crime driving in a van through a suburban neighborhood.  This is a dark humor crime script.

VESCO:  He was reaching in.

VESCO:  I saw him reaching!

JOSS:  You couldn’t aim for his leg?

VESCO:  You think he was gonna aim for the leg if he pulled first?

VESCO:  Your back was to him when you were grabbin’ the bag.

VESCO:  So why was he reaching?

JOSS: Because you see what you want to see.

VESCO:  What if he did pull out a piece?

JOSS:  Then you handle it—

VESCO:  I did handle it!  He should have kept his hands at his sides.  He was sending mixed messages as soon as he got out of the car and I wasn’t about to let mixed messages be a mistake for us.  (puts his hand in the air steadily)  Look, I’m as calm as a feather falling from the sky.

JOSS:  What are you talkin’?

VESCO:  I’m not jumpy, I know what I was doing.

JOSS:  It didn’t have to be this way.

VESCO:  Next time I’ll just stand there, that what you want?

JOSS:  You wait until you see the piece!

VESCO: By then it’s too damn late, you know that.  The Good, the Bad and the Ugly is all I’m saying.

VESCO: I’ve watched enough westerns man, you have to be quick, it’s all in the timing, if you don’t strike out first you’re done.  It comes down to seconds, seconds!

JOSS:  We aren’t in a freakin’ WESTERN movie, we are in real life, with real people and real guns!!

JOSS:  Do you think you’re some kind of Clint Eastwood?

VESCO:  You don’t understand sh’t.  If you took the time to educate yourself and watched any of these movies with me, you will see how I’ve kept the heat off us each and every time.

VESCO:  He was startin’ to turn and I beat him to the punch.

JOSS:  The dude had a hand gun strapped to his ankle, there was no way possible that he would have had the time to bend down, grab it, come back up, run up from behind us quietly and shoot us.  You are too red!

JOSS: You shootin’ everything and everybody in your sight.

VESCO:  Which means, by definition according to Google we are a member of a gang of violent criminals, right?

VESCO:  That means we aren’t supposed to give a damn about nothing.  You’re growin’ soft.

VESCO:  I’ve been meaning to tell you, this past year, whenever we go out for business you look scared.

JOSS:  What you say?

VESCO:  I just called you scared right to your face.

Joss screeches the van and violently pulls over.

JOSS:  You say sorry or—

VESCO:  Or what?  What you gonna do if you’re so scared?

Joss jumps out of the van.

VESCO:  What you…you wanna have a go?

Vesco steps out of the van.

JOSS:  I’ve had just about enough out of you.

Joss pulls out a hand gun and shoots Vesco in the thigh.

VESCO:  What the hell on Earth?

JOSS:  Don’t make me put another cap in your ass to match.

VESCO:  You’re a real lousy older brother.  This is what I get for saving your life?

JOSS:  That’s what you get for calling me scared, you idiot.

VESCO:  Well, you been acting meek.

VESCO:  You don’t let me kill nobody.  I can’t kill one single person without you complaining about it.  I don’t know what’s gotten into you.  This past year you’ve been so damn difficult, I can’t do nothin’.  It’s like walking on egg shells with you.  You used to encourage me and cheer me on but now, it’s like you don’t support anything I do and all I’m tryin’ to do is earn your favor.  Just once, just once I’d like you to say you’re proud of me, make me feel like I’m doin’ something right.  That so hard?  Ever since you met that girl, what’s her name, Marlata.

VESCO:  The girl from the supermarket…I should have known.  She’s gotten under your skin, hasn’t she?

VESCO:  She has!  Ever since we robbed that town you been different.  No wonder you wanna go back there so bad…it’s Marlata!

JOSS:  Don’t you dare say her name not one more time.

VESCO:  Oh, you bastard, AGAIN?!  She’s changing you!  You can’t even shoot me and mean it…these are only flesh wounds, you know why…CAUSE YOU ARE WEAK!

JOSS:  I oughta blow your dumb ass head clear off.

VESCO:  You don’t have the stomach for it.

JOSS:  No, I do but I’m already in too deep when Mama sees what I done to ya.

VESCO:  She gonna beat yo ass.

JOSS:  You had it coming.  Mama will understand.

VESCO:  Are you in love?

JOSS:  I ain’t in love.  I’m pissed off.  Thought we’d have a longer run with those clowns and you go and kill ’em both.  We had a good thing going.

VESCO:  We start over.

VESCO:  Leg is fine…didn’t mean to call you scared.

VESCO:  Don’t change man, I got nothin’ if you change.

JOSS:  Look…look…if we can come together and compromise, you know, meet each other halfway, we’ll have a chance, otherwise if we keep going the way we goin’, we gonna end up in jail or shot up ourselves.

JOSS:  You don’t need to try so hard, you’re my brother.

Both men climb back in the van.