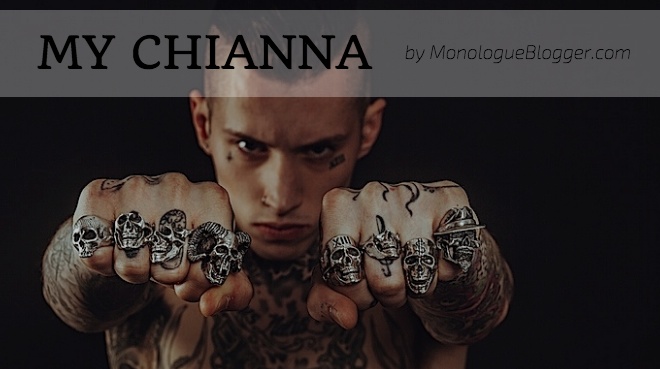 In My Chianna, FRANCESCO has been having a terrible week running around Haiti and Santo Domingo. His day is about to get much worse when he makes a final stop with SYSCO.

(S laughs hysterically – after a moment)

F: Is that why you sent me to do this job?  Cause it’s funny to you, Sysco?  Is it so funny, that I got chased by forty Haitian men with jungle warrior knives the size of swords because I stepped on their territory in some foreign f’ckin town that doesn’t even exist on a map. I nearly got my head chopped off!  I barely made it back alive!

S: How was Chianna, you send her my love?

F: She was superb. When I told her what you asked me to tell her she slapped me across my face clean.  So, we were off to a good start.  Thanks for that.  So, now I’m meeting Ramirez with a bloody nose to make the exchange and he’s looking at me like he’s about to blow my head off the entire time.  I get driven across the country by a non-stop singing criminal who went through every Shakira song with a disturbing obsession before dropping me off in Otra Banda in the Dominican Republic.  I won’t even tell you what happened next because it makes no logical sense but here I am my friend.  There’s your shit, pay me my money so I can get on with my life and back to the states.

(S throws an envelope at F.  F looks inside and see the money)

F: I’m fine man, but I’m still trying to get my head on straight from all this.

S: When is your flight?

F: In four hours and I should be leaving if I’m going to make it.

S: No problemo, amigo.  I’ll have Ramone take you to the airport.

F: Are we square on this now?

F: Even.  Are we even?  Is everything good between us?

Why didn’t you tell me about the girl?

S:  (smiles) The girl, the girl…my Chianna.  Why didn’t you tell me about her?

F: I told you she smacked me across the face.

S: Yes, that is true but why didn’t you tell me you had her.  My…Chianna.

F: We never did anything.

S: Look, it’s okay.  Ramone will take you to the airport.  No reason not to tell me but maybe you are the private type.  I understand.  It’s your business, not mine.

F: Yeah but, you and Chianna, that was something that ended a very long time ago, isn’t it?

S: Actually, she does what I tell her to do.  And I told her to f’ck you so that must mean she didn’t do her job and now she will pay the consequence.

F: Wait a second.  She tried but I didn’t because I didn’t want to.

F: But it didn’t happen.

S: I see.  So nothing happened then?

S: So these photos sent to my phone are fake?

F: I don’t remember it one bit. I was drugged.

I know you were drugged.

S: Because things get boring out here and I constantly have to find ways to entertain myself or I will go mad.  Right now, I am extremely entertained…so entertained I cannot contain myself.  I live for these moments.  I love it!

(pulls out his gun)

You see?  There is always a thrill to catch a liar right dead smack in the act of the lie and to provide instant satisfaction in the face of a lie.  This gun cured many liars.  Are you a liar?

F:  I was drugged and don’t remember anything with Chianna.

S: If a man were in a Coma he would recall Chianna. Okay look, this is an interesting moment for you because look, you are now dead.  Yeah?  You are dead…listen…feel it…feel the quiet seconds before your death…do you feel the energy I was talking about?  The rush?  Mmmm…shhhh….

(both men look one another in the eyes)