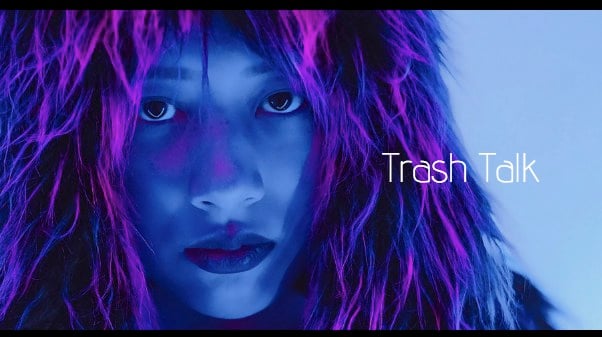 In Trash Talk, Silene doesn’t want to continue her relationship with Tina after two months of dating and her best friend Darren tries to make sense of it.

SILENE: She’s such a negative person.

DARREN: Don’t start talking trash about your girlfriend already. You guys have been dating for only two months.

SILENE: But she is such a negative b***h.

DARREN: And what are you, Miss Happytime?

DARREN: You are cranky.

SILENE: But I speak the truth.

DARREN: You elaborate on the truth cause you have the gift of gab and come from Brooklyn so you really know how to complain about sh’t.

SILENE: Am I supposed to remain quiet with my own thoughts?

DARREN: You are incapable of such heroic acts.

SILENE: If you told me not to say anything about something, I would go to my grave without uttering a single word.

SILENE: I can keep my mouth shut if I have to.

DARREN: In a different context but if I asked you not to whine, complain or be cranky for one whole week, you would last two hours max.

SILENE: That’s a bet we will have to make…at some point.

DARREN: Right, at some point.

SILENE: I can’t make a bet like that now cause I have too much to say to you.

SILENE: So, I like her a lot, let me start off by saying that out the gate because she’s a real sweetheart…she’s kind, gentle, smells nice, she’s great in bed and is one of the most thoughtful people I’ve ever met.

SILENE: Yes, there’s a but, but I want you to know all the good things first.

SILENE: There’s a ton more good things but she’s always negative and it seems to be outweighing the good qualities.

DARREN: Give the girl a chance. You always do this, you’re always too quick to judge—

SILENE: But I’m telling you how I feel. Am I supposed to find myself getting wrapped up into something that has no chance?

DARREN: You think your relationship with Tina has absolutely no chance?

SILENE: I’m not saying that exactly—

DARREN: But that’s what you said—

SILENE: That’s not what I mean—

DARREN: That’s what you mean, I’ve known you since forever so stop the sh’t now so we don’t waste each other’s time here.

SILENE: Fine! I want to break it off with her.

DARREN: You two barely got it on and you want to call it quits?

SILENE: What’s that saying, “Leave now, get there early?”

DARREN: …No, it’s not right…to be honest, I like Tina, I like her a hell of a lot and I think you’re jumping the gun like you always do. You need to slow your roll and be patient. I’m sure there’s a ton more to learn about Tina before you pull the plug.

DARREN: I’ve known you a long time and I think I finally realized what it is…you’re scared. You’re scared of a real relationship because you really like her and this time you like her more than the downside and it frightens you. I think you’re making excuses to avoid that truth, so you will blow up something like her being negative when in reality it’s not so deep…you are looking for things to find an exit so you don’t have to be committed in a relationship.

DARREN: Don’t start lying to yourself.

SILENE: I mean it, she’s too negative. I can’t deal. We were out the other day and hit up a flea market and all she did was moan about the heat, she went on about how the flea market had lousy items, she was stressed out over finding a decent street vendor for food, she went on and on about the blister on her toe, all day long, non-stop. And then I thought back on things, I thought about all the times we’ve gone out and did things together and it hit me that it’s always been the same, this heavy negative energy she brings and I’ve noticed I’m not myself, seriously, I’ve noticed that I’m always down and less energetic to do things and I think it’s because she’s influencing me to be that way.

SILENE: I’m taking a break cause it’s been giving me horrible headaches.

DARREN: It’s the coffee, that’s why you are feeling lousy, you’re detoxing.

DARREN: Same thing happened to me, I was high on caffeine and quit cold turkey and crashed for like a month. I was like a zombie.

SILENE: I’m sure that’s part of it but this is about Tina, not coffee.

DARREN: So this relationship isn’t gonna work out because of detox.

DARREN: Just saying, the timing wasn’t in the stars.

SILENE: Coffee or no coffee, I am breaking it off cause I’m not happy and I am not going to be in one of those relationships again where five years goes by in my life and we finally reach a verdict I’ve always known all along.

DARREN: Are you certain you’ve reached a verdict on Tina?

DARREN: Okay, I won’t stop you lovey and I support you.

SILENE: You make me feel terrible about this.

DARREN: Think about what I said…about the whole fear of commitment thing. It’s real you know…because of what you’ve gone through, there’s probably hesitation…just do me a favor and filter that through your system before officially ending things.

SILENE: I will, I get what you’re saying, I think there’s truth to it but I also think I’m losing interest, you know?  That excitement when you first meet somebody…it’s already going dim.

DARREN: I get it.  You do you girlfriend and as long as you feel like you’re making the right decision, then there is nothing that can stop you.

SILENE: You down for some coffee?

DARREN: I’m down if you’re down.