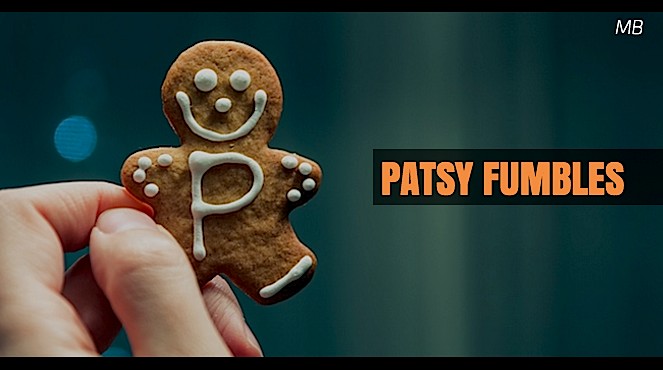 In short comedic script Patsy Fumbles, Patsy finds himself searching high and low for his oatmeal cookies while his Grandson plays outside in the yard innocently.

Patsy fumbles through his cabinets. Grabs an oatmeal cookie container.

Patsy: (to himself) Feels a little light…I just bought ’em. (he pulls tray out of bag) You gotta be shittin’ me. Man! Fat bastard. He ate all of ’em. Not one in the tray. Not one. I just bought ’em. Where is he, where is he that fat—

What are ya doin?

Patsy: Swingin’ the bat? What happened to my oatmeal cookies?

Ray Ray: I had some.

Patsy: Had some? You ate the whole container of cookies.

Ray Ray: I had a midnight snack.

Patsy: Are you kidding me or what? You’re fifteen years old.

Patsy: How can you have an appetite like that?

Patsy: This kid…HOW can you eat twenty-four cookies in one go?

Ray Ray: I was hungry, Grandpa?

Patsy: What am I gonna do with you boy?

Ray Ray: I thought I left a few.

Ray Ray: What does that mean?

Patsy: It means you have no consideration. Hey, I don’t mind you eating a few of my oatmeal cookies, alright? Hell, have half the tray even…but you didn’t leave me or your Grandmother one cookie. Not ONE.

Ray Ray: Grandma said I can have anything I want so…you know.

Patsy: You need to learn some manners, son. You’re like a garbage disposal. What happened to my raspberry pie the other day? Did you eat that too?

Ray Ray: It was delicious.

Patsy: Alright, look…you like to eat, I get it. I understand it but you need to have some manners. Leave some food for other living human beings.

Ray Ray: I do but then when I go back hours later, I’m hungry again and I eat more of what I like and then more hours go by and then I eat again cause there’s nothing else and then it’s gone.

Patsy: But not the cookies! You banged those right out in one sitting. Like they didn’t even exist.

Patsy: Right. You didn’t know. You’re stomach knows. And your stomach should have spoken up and said, “Hmmm, maybe Grandpa or Grandma would like to try these delicious yummy cookies. Maybe I shouldn’t eat all three hundred and fifty nine of them.” What about that?

Ray Ray: You are.

Ray Ray: I have five dollars. Is that enough to buy more oatmeal cookies at the store?

Patsy: You don’t…you don’t gotta buy any, just have consideration for other people who live in the house.

Ray Ray: Are you making breakfast?

Patsy: You want in?

Ray Ray: What are you making?

Patsy: That depends on what you left us in the fridge. What do you want?

Patsy: Okay. Let me see what we have.

Patsy: Thank God I had a daughter and not a son. Thank you God for loving me.

Frannie: Pat, what is all that yelling, it’s six in the morning?

Patsy: Your Grandson ate all my oatmeal cookies! And now he wants waffles and ice cream wrapped up with a bow on top.

Frannie: Awww, does he?

Patsy: Don’t you see he eats everything? I have to hide food from him, that’s it.

Patsy: If I don’t start my day off right, the rest of my day is horrible, especially with fat boy here.

Frannie: Well, it may be longer.

Patsy: Longer? How? Who?

Frannie: We may have to watch him for an extra week.

Frannie: Jessica called and asked me. I can’t say no. They asked her to stay a few more days before she takes over the new position.

Patsy: This is mega.

Frannie: It’s fine. It goes by fast and then you’ll miss him.

Patsy: I don’t think so. I’m scheduling bowling for the rest of the week.

Frannie: You can’t, your back will go out on you again. You only got better.

Patsy: I’ll do anything.

Frannie: Want me to make you your ginger bread P’s?

Frannie: (singing) I know you love them.

Patsy: Yeah? But what about black hole out there? He will swallow everything in his path. I won’t even get to smell them.

Frannie: No, no. I will tell him the rules. You first.

Frannie: But only if you promise me that you will be good, spend time with him and no bowling.

Frannie: Today, if you want.

Patsy: Alright, I’ll do it.

Grandpa: You see? Is it me?

Frannie kisses Patsy on the cheek.

Go back upstairs. Have your coffee. I’ll make Ray Ray his waffles.