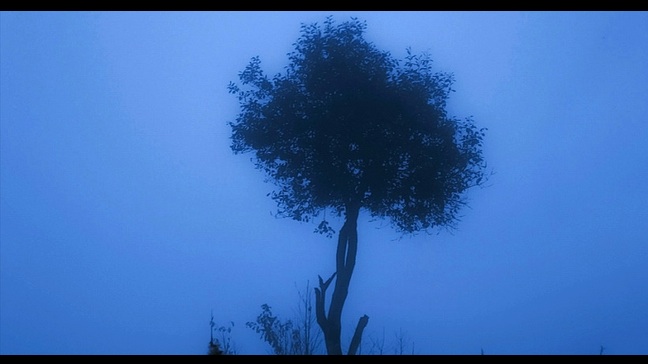 In The Crows of Blackthorn, Walt speaks to his daughter for the first time about crows that turn themselves into dragons, if provoked.

WALT:  If I tell you this, y’ have to swear this remains between the two of us…y’ swear it? (Becky nods)…Alright, well I’ve seen ’em…up close. When I was ’bout your age. I was alone at the time. Decided to take a shortcut back home after football practice, was gettin’ late and I was starvin’…was told by my dad not to ever go near Mrs. Blackthorn’s property, but on this particular evening I figured I could cut through her property and save myself a good fifteen, maybe twenty minutes of walkin’ ’round it instead. So, I hopped the iron gate.

‘Bout halfway through her land I saw a crow. Then another and yet still another. More and more of ’em started landing on the branches to them big old oak trees I was walkin’ under. They kept coming out of nowhere, swarmin’ and gatherin’ with all their attention placed directly on me, “CAW, CAAW, CAW, CAW!” and so I ran! I ran my face off, trying to escape the sound of ’em crows. And then I felt something really big chasin’ behind me. I was too scared to turn ’round so I just kept runnin’ hard as I could, but I could feel whatever it was gettin’ closer.

When I reached the other side of the property I panicked ’cause of that big iron gate, but I was skinny ‘nough to get through its bars and make it to the other side.

That’s when I looked back behind me and saw everythin’ that still feels like a dream…flying in the air above me…an enormous, white dragon..its emerald eyes starin’ directly at me, lettin’ me know how angry it was and then, then there was the sound of a horn coming from the distance and the dragon turned to acknowledge it, but not before shooting out fire into the sky from its mouth! It took one last look at me and flew off. (beat) I stood there, frozen. In shock. I was alive. I was safe. But I knew I was lucky. I knew I’d never see anything by the likes of it ever again. And since that day, I never have. 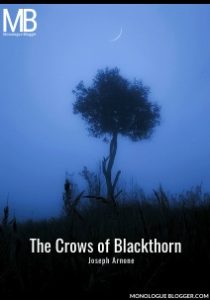 In the one-act eplay, ‘The Crows of Blackthorn, Becky gets into trouble with the law for trespassing on Mrs. Blackthorn’s property with her friends.  Her father Walt reprimands her and explains to her why she should never again venture out on Blackthorn’s land.  1 Woman, 2 Men.  Drama/Fantasy.