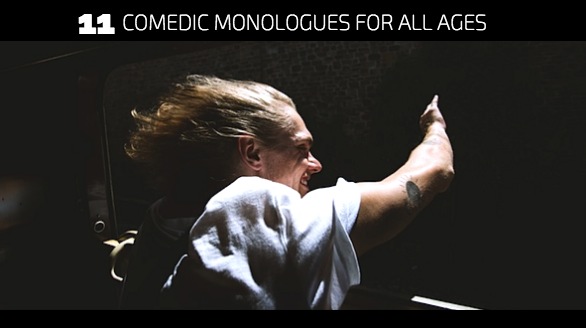 11 Comedic Monologues for All Ages will help you find funny material for teens and adults ranging 1-2 minutes in length for upcoming auditions.

11 Comedic Monologues for All Ages

THE LAST M&M SAMURAI
Dan goes on a monologue about why he doesn’t think it’s cool to eat the last remaining peanut in the candy bag.

DOG ANXIETY
Zara made the biggest mistake of her life by agreeing to babysit her best friend’s puppy.

DARLING FACE
Beverly thinks she’s beginning to lose her mind by living the same day over and over again.

PHONE CALLS
Meagan wants Frank to call her already and stop making her wait days on end for no good reason.

UNDERWHELM
Wilma is dazed and confused and wishes she can snap out of her cave.

HULLABALOO
Maggie wants and needs her son to change and stop getting into trouble with the police.

THERE HE IS
Pete loves his job and loves his salary but he has growing anxiety of a co-worker who won’t leave him alone.

ACROSS THE FACE
Bobby has done his friend a favor by lending him money to put up a play but during a rehearsal Bobby believes he can do a better job at directing.

MEDIUM
This guy suffers from a bad case of Napoleon disease.

FUNGUS AMONG US
Alexa works hard and when she comes home to a messy house caused by her roommate she loses control.

READY, AIM, AIM
Rose wants to know why her boyfriend can’t seem to aim straight when urinating in the toilet bowl.