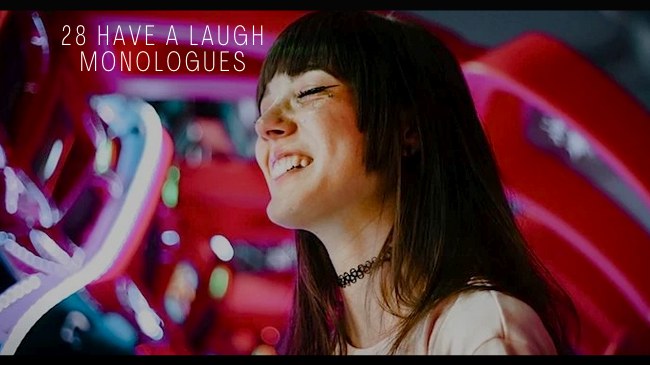 28 Have A Laugh Monologues dives into comical topics which include working at the office, pranks, tidiness, irrationality, embarrassment and a ton more.

The free monologues shared here are from plays and for both men and women.

28 Have A Laugh Monologues

Have A Laugh For Women

DOG ANXIETY
Zara is watching her friend’s dog for a few days but it turns out to be a literal nightmare.

DARLING FACE
Beverly is a newly married woman who discovers the reality of her situation and needs to figure out a way out.

PHONE CALLS
Meagan doesn’t get why guys always have to play games when they previously showed interest.

UNDERWHELM
Wilma lives in a fog world of her own design and wishes for an escape plan to break her out of the monotony.

HULLABALOO
Maggie is at a loss as to what to do with her rebellious teenage son.

RATHER BE A MAN
Two young women discuss the trials and tribulations of men coming on to them.

FUNGUS AMONG US
Alexa cannot withstand the abuse her roommate bestows upon her for being messy and inconsiderate.

READY, AIM, AIM
Rose can’t stand that her boyfriend doesn’t seem to know how to aim correctly when urinating in the toilet.

FOOD FOR THOUGHT
Kelly suspects her friend is stealing her creative story ideas on the down low.

KICK IN THE PANTS
A waitress refusing to say yes to a date from a persistent customer.

PIZZA FROM CARLOS
Corky enters the apartment of two men she has never met before.  She goes on to treat them like her best friends and shares her problems while offering them free pizza.

Have A Laugh for Men

THERE HE IS
Pete tries to figure out how to get rid of his possessive co-worker Andrew.

ACROSS THE FACE
Bobby wants to help his friend direct a play and feels that he has the right as construction worker turned first time theatre producer.

MEDIUM
This guy thinks he’s the leader of giants when in reality he’s lucky his feet touch the floor when he sits.

GRACE PERIOD
Two pals are stuck at home during a pandemic.  One of them is too chilled out and the other is too intense.

LOCAL GUY FROM THE NEIGHBORHOOD
Phil teases his neighbor about being a lousy father, only to meet his neighbor’s daughter for the first time and instantly falling head over heels for her.

FRONT ROW SEATS
Joe is lactose intolerant and needs to desperately go to the toilet, but the play must go on.

THE LAST M&M SAMURAI
Dan explains his theory about never eating the last peanut in the m & m bag.

LANDED ON YOUR DOORSTEP
Mel has been living with his brother and sister-in-law for two whole years and apparently doesn’t see anything wrong with it.

UNTIL THE NEXT EVENT
Drex is being a little bit overdramatic when he notices a dent in his newly purchased book.

OUTTER REACHES OF SPACE
John stresses out over how slow his girlfriend shops.

HEAD IN THE CLOUDS
Drizzle confronts Frank about getting focused on what he really wants to do with his life.