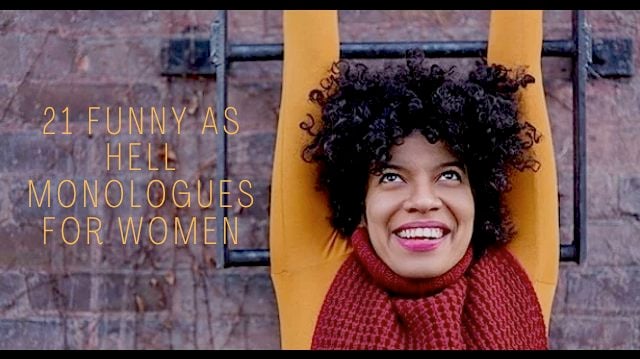 21 Funny As Hell Monologues for Women brings a bundle of free comedic monologues for an actress in need of fresh audition material.

21 Funny As Hell Monologues for Women

DARLING FACE
Beverly is trapped inside her new married life and suburban home and needs an escape plan.

PHONE CALLS
Meagan is confused as to why men play games when it comes to making the first phone call.

UNDERWHELM
Wilma leads a basic and boring life and needs a significant change.

HULLABALOO
Maggie is stressed out over her troublemaker son and seeks solace with her next-door neighbor Dun.

RATHER BE A MAN
Two best friends discussing how men can be lame when flirting.

FUNGUS AMONG US
Alexa has reached her peak of tolerance with her roommate regarding how sloppy she is as a person.

READY, AIM, AIM
Rose is pissed that her boyfriend doesn’t aim properly when urinating in the toilet bowl.

FOOD FOR THOUGHT
Kelly talks to her friend Paula about how she thinks their mutual friend is deliberately robbing her of her creative story concepts.

KICK IN THE PANTS
A romantic comedy about a waitress consistently rejecting a man who continually tries to ask her out.

PIZZA FROM CARLOS
Corky plops herself on the couch of two strangers and goes on a rant about her problems.

NOBODY CARES
Maggie is an overbearing sales representative at a retail shop that won’t allow a customer to leave until they buy something and are totally satisfied.

OVER THE MOON
What happens when two people go out on a first date but happen to be from different time periods in history?

SEARCHING FOR BUBBLE BUTT
Margot pokes fun at her boyfriend for never realizing that he actually doesn’t have the butt he always imagined he had.

GOOD COMPANY
Loretta admits to her daughter that she’s been crushing on a waiter that works near her home at a restaurant she frequents.