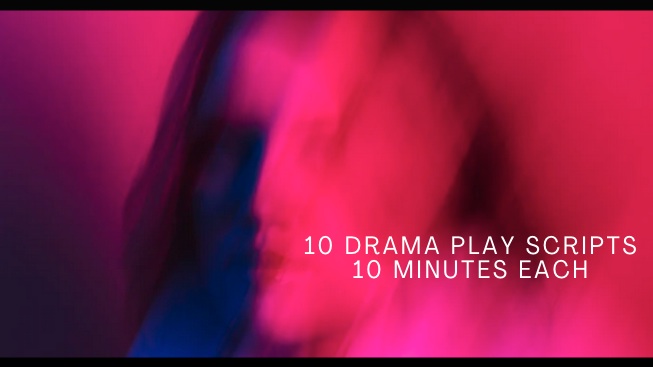 In 10 Drama Play Scripts 10 Minutes Each actors/creators/producers/directors will find a short list of 1 location plays for creativity.

We also encourage you to gender swap the parts if that interests you.  All the written roles can be interchangeable and tweaked to suit your creative needs.

A DECENT MAN (2 Men)
Fabian visits Father Del Henney hoping he can convince him not to do an evil deed.

DRENCHED TO THE BONE (1 Woman, 1 Man)
Miles visits his ex-girlfriend unannounced because he can’t take being without her and even though he knows they won’t be together again, he wishes to see her in person to makes things easier for himself.

STARS OF THE DESERT (1 Woman, 2 Men)
After receiving a disturbing phone call, Chip travels across the country to visit his father, only to find him in his usual unhappy, bitter and nasty state.

SPITFIRE GENE (1 Woman, 4 Men)
Boris tries to instill composure in his daughter when a group of guys harass her.

TOAST OF BROADWAY (1 Woman, 1 Man)
A writer and an actress struggle to survive together while their demons seem to always get the best of them.

THE TOY TRAIN (1 Man, 1 Elf)
Bill is a never do good father who is determined to bring his ill son a gift at the hospital but his train is long delayed and just when he thinks his luck has ran out he encounters an elf.

LOVE IS A STRONG WORD (1 Woman, 1 Man)
Mischa has a rude awakening for her boyfriend when he comes to visit her at college campus.

HIGH PLACES (1 Woman, 2 Men)
After a night encounter, Harrison tracks down and locates Tiffany at the diner she works at only to discover that they are much more different than meets the eye.

WHEN THE COOKING IS DONE (2 Women)
Marza has had a life-changing experience after seeing a play by herself that she deeply relates to.

SPIRIT OF THE HORSE (1 Woman, 1 Man)
Turner shares the story of how a horse died in his arms in the middle of Manhattan.