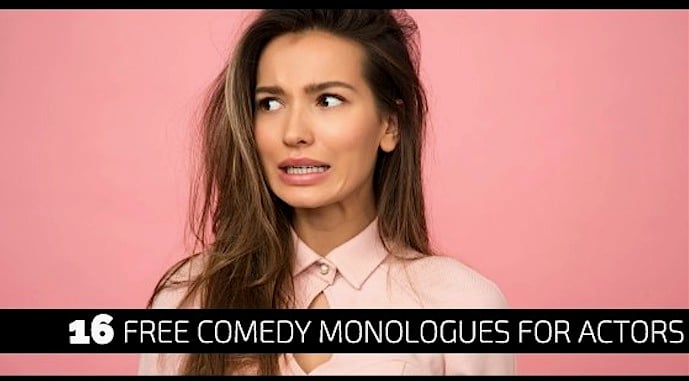 16 free comedy monologues for actors is a good mix of male/female comedic pieces for your next audition, class, actor demo reel.  From Teens to Adults.

DOG ANXIETY
Poor Zara agreed to help her friend out by watching her puppy and it’s been hell ever since.

DARLING FACE
Beverly fulfilled what she thought was her ideal life only to discover she was wrong all along.

PHONE CALLS
Meagan doesn’t give a damn if the new guy she met calls her…or does she?

UNDERWHELM
Wilma is a good person leading a dull life but her co-worker hears her plea and introduces her to a new world.

HULLABALOO
Maggie has a difficult time raising her teenage son and seeks advice.

RATHER BE A MAN
Two young ladies talk trash about how often and how silly men are with their pickup lines.

FUNGUS AMONG US
Alexa is organized and tidy, her roommate is messy and unpleasant.

THERE HE IS
Pete just wants to do good work at his new job but has to be constantly distracted by his co-worker Andrew.

ACROSS THE FACE
Bobby is a first time producer for a play by way of a favor for his director friend but it turns out that he thinks he can do a better job directing the play.

MEDIUM
Derek is the Tarzan of hobbits.

GRACE PERIOD
Two friends are living together in an apartment during a global crises, what could go wrong?

LOCAL GUY FROM THE NEIGHBORHOOD
Phil falls head over heels for his neighbor’s daughter.

FRONT ROW SEATS
Joe has an emergency appointment with the bathroom just before a play begins.

THE LAST M&M SAMURAI
Dan has an interesting point of view when it comes to his philosophy about never eating the last peanut in his m&m bag.

LANDED ON YOUR DOORSTEP
Two years ago Mel crashed in on his family to take up residence…is it time for him to bounce?