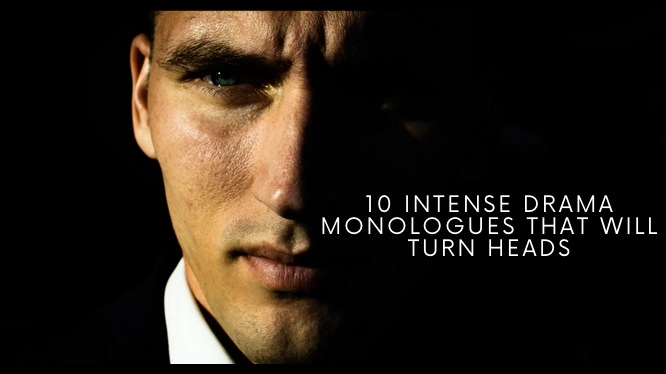 10 Intense Drama Monologues That Will Turn Heads creates imaginary circumstances for the drama actor to intensify the monologue.

CRACKS IN STONE
Bethany can no longer take her husband creating fantasy over their relationship, including the well being of their daughter.

GRAIN OF SAND
Sasha has cornered someone who has threatened her brother and now it’s up to her to defend his honor, only it’s way more intense than one could ever imagine.

MOMMA, I’M NO FOOL
Daphne is living a rough life.  Her mother is hooked on substance abuse and she’s never met her real father.  But that is all about to change as she’s been in touch with him and going to meet him for the first time.

NIGHTFALL
Betsy is the caretaker for her dead sister’s son Willard who has been nothing short of a pest for her criminal business operations.

THE OTHER HALF OF MADELINE
Madeline confesses the painful truth to her son as to how his sister truly died.

CASTLES IN THE SKY
Manuel is a prison warden specifically assigned to crack the minds of his prisoners.

CHECKING IN
Rob against his will locates and visits his father after not seeing him for more than sixteen years.

EYE OF THE WHALE
After years spent abroad, Gene has returned back to his hometown to encounter his past love and old friends with many people who hold a grudge toward him.

SACRED LAND
Mr. Craggsdale has a warning to give to his business employer and if his warning isn’t taken seriously, everyone involved will lose their life.

VIN ROGUE
Cosmo is a struggling poet who is lost in his words and emotion and begins to blur his reality with his imagination.