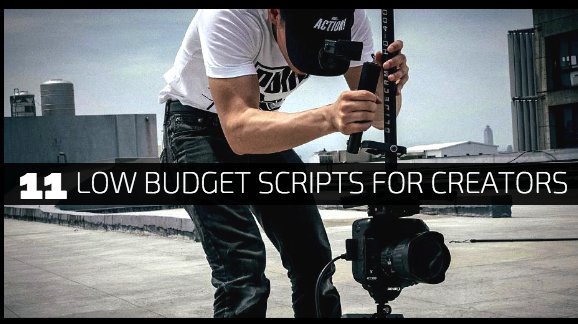 11 Low Budget Scripts for Creators offers help for creatives to practice their craft and storytelling skills as an actor or filmmaker.

We know how hard it can be when trying to get a creative project off the ground.  This is one of the reasons why some of our scripts have minimal locations and characters.

By having less locations and less characters, you will have more room as a creator to zero in on your creativity, rather than stress over the larger economics of a project.

Let’s have a look at some of the scripted scenes below to save you time, money and help you become more productive with your own creative ideas.

EATING MONSTER MACHINE
Bill can no longer stomach watching his work partner Joel wolf down his food like an animal.  The pair embark on a food bet to prove their own points.

EACH DAY GO BY
How important is a man’s old dirty pair of boots?

SIGNAL
Michael invites his friend Tasha over to prove to her that he’s been hearing voices inside his headphones.

THE FINEST PILLS THIS SIDE OF TOWN
A mother does all that’s in her power to get her son out of trouble when she discovers he’s in the thick of it.

DEATH WAS THE ONLY OPTION
An off-kilter dark humor piece that finds itself lending out to your own interpretation.

WAY OF THE WIFFLE BALL BAT
A mother and son argue in the midst of choking on a sandwich.

LOWER YOUR VOICE
Pella surprise visits her good friend James at the gym and confronts him about his usage of steroids.

THE HIRE
Sam brings his co-worker Relly into his office to discuss a serious situation that involves life and death.

THE WAY THAT YOU ACT
Gregory can’t believe the immaturity of how his girlfriend acts in public toward a waitress she thinks is flirting with him.

BAD TALK
Close friends hang out on the corner when they get approached by the local ‘crazy’ person, who also happens to secretly  be one of their cousins.

EVEN THIS
Barbra and her son Eddie live alone in a house when they receive a final eviction notice.