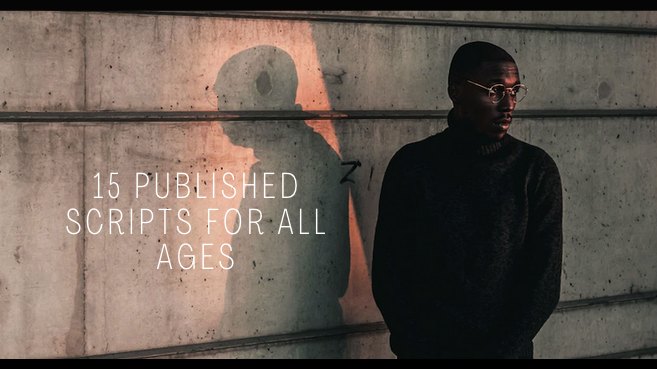 15 Published Scripts for All Ages can be shared online for video projects, non-profit films, drama class and auditions/casting workshops.

15 Published Scripts for All Ages

BASKET CASE
The simple yet complicated bond between a mother and daughter from Queens, New York.

ASK OUT SAMANTHA SCHEME
A group of elderly men compete to ask out a woman they all like.

CRUEL JOKE
Two crooks await instructions for their next ‘job’.

DISTANCE BETWEEN US
A father and daughter arrange a meetup in person to try and work out their problems.

SHRIBBLE
A couple goes vegan thinking it will be a breeze, until they get hungry and begin to realize the challenge of it.

HOLY SATISFIED
Two strangers meet and discuss a mythical concept that may or may not be true.

MATCH MADE IN HEAVEN
As difficult as it is for Mick, Mick reveals his vulnerable side to his girlfriend in order to let her know he loves her.

FEAR OF THE FAT MAN
Willo is racist against heavyset people and what unfolds is pinpointing the source for his point of view.

TIMID TOM
Tom is have problems with his wife.  She’s too busy and he’s not physically aggressive enough.

HARD UP
An inexperienced crook gets himself into trouble while trying to pay off a debt.

THE DUST OFF OUR HANDS
Angie helps her husband Marvelli figure out his new path to self-fulfillment.

NAME OF THE MAN
Jimmy caused a tragic car accident while driving his car and worse…he also left the scene of the crime.

PIP’S RESTAURANT
A man has his heart broken when he finds out the woman he loves is in love with his best friend.

DAMNED IF I DO
Laborio is stuck between helping his brother in need and staying loyal to his girlfriend.

LESS SOAP, MORE BLOOD
Roma refuses to perform in another soap commercial because what she really wants to do is act in Shakespeare plays.