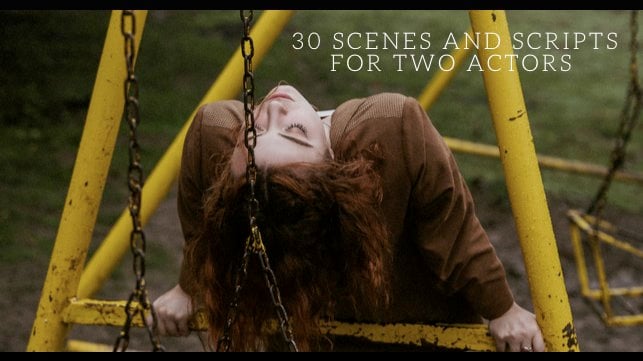 30 Scenes and Scripts for Two Actors

I’VE FAILED MY DESCENDANTS
Tiara is the heir to her family’s property but the problem remains that she doesn’t have the money to maintain it and is on the verge of losing everything.

IT’S NICE TO KNOW THERE’S SOMEONE IN THIS HOUSE
Marva reflects fondly on her father and talks to her son about how he reminds her of him.

IT’S A QUIET PLACE TO CHAT
Kendra has a breathing condition that prevents her from living a normal life.  There’s a guy she likes that she ants to see but her mother finds out and tries to prevents her from it.

CAN I MAKE A CONFESSION?
Crystal is a runaway teen fending for herself against the elements of life.  Coincidentally, an old friend’s father notices her in a parking lot and tries to help her circumstances.

EVER LISTEN TO BLUES?
Kyle becomes friendly with Scarlet while the two leave detention and find a common interest in things.

I DON’T WANT ANOTHER DUMB ARGUMENT
After years of not speaking two sisters come together to try and solve their problems.

DON’T CALL ME NUTS, YOU KNOW I HATE THAT
Frank is in love but with a woman who is bad for the family business.

I HAVE AN EGO CAUSE I’VE EARNED MY EGO
After not hearing from his father, a son visits him at work to discover the reality of why.

HOW ABOUT HELLO?
A husband is getting crushed under the pressure of money and taking care of his family.

YOU COULD GO NOW
Daphne is looking to find a new path to life by locating her biological father while coping with her mother’s addictions. and destruction.

MAYBE YOU’RE HAVING A MENTAL BREAKDOWN OF SOME SORT?
Cathy can’t seem to keep her behavior and emotions in check while meeting a good friend at an ice cream shop.

NEVER IN A MILLION YEARS DID I THINK YOU’D BE AN ACTRESS
Kimmie and Jarla are undergoing a shocking loss of a friend, which sets them on the path of self-discovery.

HAVE YOU SEEN MY GARDEN?
Mailbox Marvin has come to the end of his contract arrangement with Doctor Paulson.

I’M IN THIS FOR LIFE, MRS. LARNER
Lenny has been struggling all his life for a window of happiness he can slip through.

WE’VE TRIED EVERYTHING, HAVEN’T WE?
A period drama exploring racism within a small family with different shades of skin tone. 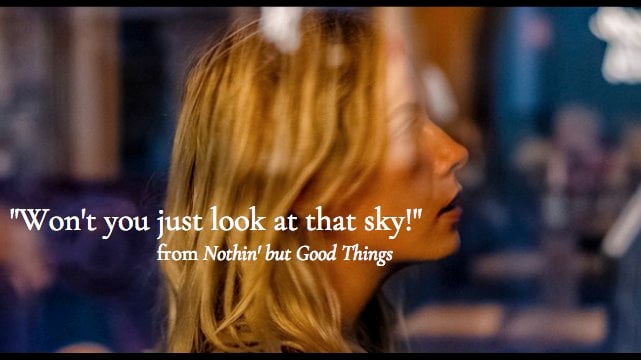 WON’T YOU JUST LOOK AT THAT SKY
Betty Sue and Dunston were once in love but circumstances forced them to part, until now, their situation have changed but the past may not be entirely over.

I WOULDN’T GO NEAR HER
Martin visits his girlfriend at college and gets the surprise of his life.

MAYBE THERE’S BEAUTY IN SELF-SACRIFICE
Reggie opens up to a bartender about the difficult relationship she has with her father and in return receives a surprising response.

IS THIS BOTH PRESCRIPTIONS?
A dysfunctional father and two sons try to navigate their troubled waters as they circle around one another towards the inevitable.

I TOLD YOU TO LEAVE
Johan has been struggling with his identity for as long as he can remember and he visits his parent’s with the intention of telling them the truth of himself.

I GAVE YOU WHAT I PROMISED
Before leaving for another event, this couple has a meltdown due to different views of what makes for a good time.

YOU ARE FAR FROM SOBER GIRL
Pina receives a frightening phone call from a friend who is desperate for help.  Pina gets in her car to find her friend and save her.

WHAT DO YOU DO FOR A LIVING?
A romantic comedy one-act about two people from different time periods on a first date.

YOU REALLY THINK WE GONNA MAKE IT TO FRANCE?
Two lovers are trying their hardest to escape to France before a determined hit man tries to end their life.

YOU SAID YOU HATE TEACHING
A talented dancer has had a crippling accident, forcing him to figure out how he is going to survive and take care of his family.

MAY I READ THE LETTER?
Milo’s dead wife haunts him when he receives a letter postmarked to be delivered on the day she died.

I INVESTED IN FRANCE
A father visits his daughter after not seeing her for years on end and confesses the truth to her that he is dying.

CAN I CONFESS SOMETHING TO YOU?
Willis is suffering from a form of post-traumatic syndrome after witnessing two birds on separate days bash into a high rise window.

WHY AIN’T YOU BEEN AROUND THE HOUSE?
A father and daughter come together after learning about why they have such differences.

I THINK WE’RE MISSING OUT
A teenager figure skater excels at everything she does but the emotional toll her discipline has needs additional guidance.